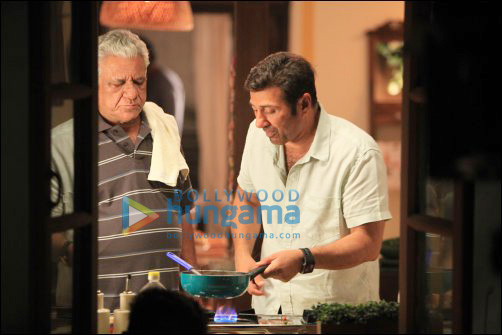 After his comic roles in Yamla Pagla Deewana series and his action avatar in Singh Saab The Great, Sunny Deol is all set to revive one of his most famous

classics, Ghayal. The film titled Ghayal Once Again which will once again see a bulky Sunny Deol flaunting his 'dhai kilo ka haath' also has Om Puri doing a cameo.

Here's a glimpse of Sunny Deol and Om Puri shooting for the film. If the picture is anything to go by, then Om Puri is seen giving company to Sunny Deol who seems to have donned the chef's hat for

a sequence in the film. The said sequence was shot in Bandra, Mumbai. A source close to the unit says, "Om Puri sir is playing a pivotal role in the film. He has started shooting for the film

already. Sunny and Om Puri were seen having intense discussion during the shoot. Om Puri Sir hasn't read the script and all he can reveal is that the police officer has retired now but still shares

a warm relationship with Sunny's character".

Ghayal Once Again will be directed and produced by Sunny Deol under the banner Sunny Sounds Pvt Ltd. The film also stars Soha Ali Khan, Tisca Chopra, Murli Sharma in a prominent roles and is

6 Underrated series that have taken the…