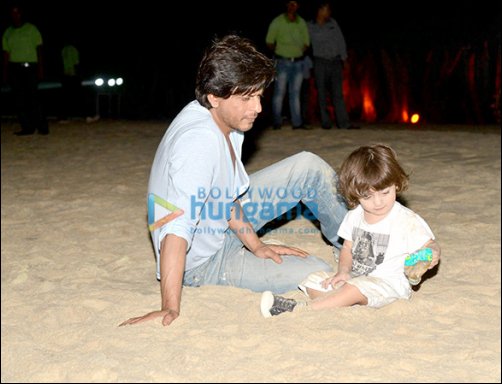 Once, Gauri Khan had mentioned in an interview that Shah Rukh Khan is totally obsessed with AbRam. While the superstar and

his wife were already proud parents of two kids - Aryan and Suhana, the third addition in the family in the form of AbRam has made them happier

than even before. Shah Rukh, who often updates his fans about his son through social networking sites, had taken his son and his wife Gauri for

the launch of Planet Hollywood in Goa which was organized by producer and actor Sachiin Joshi.


While we got a glimpse of all the happenings of the party, a candid moment was captured of the father and son bonding, which only seem to have

grown stronger when the Khan family visited Goa. Shah Rukh Khan was seen having fun with his little son in one of the famous beaches in Goa after

sunset. The actor was staring at his son lovingly, as AbRam was playing around.


Other popular personalities, who were spotted at the launch of Planet Hollywood, included Varun Dhawan, Kriti Sanon, Sohail Khan, Riteish

Deshmukh with wife Genelia, R Madhavan, Dino Morea among others.