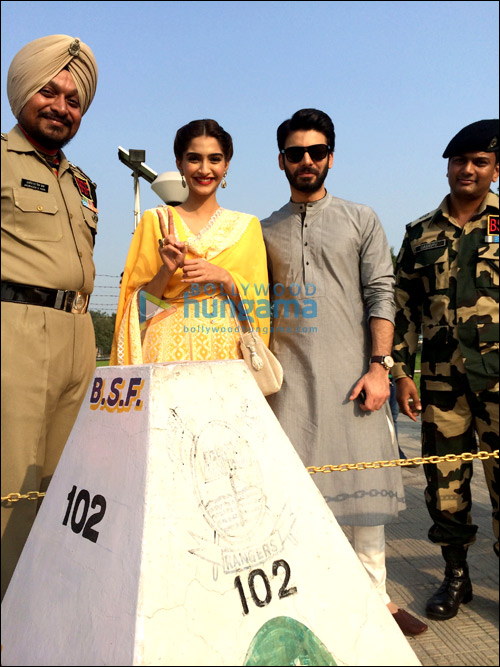 While we are well aware of the fact that this year has re-defined the India Pakistan relationship owing to many actors from our neighbouring country making their debut in Bollywood, the team of Khoobsurat has gone a step ahead in this case. The film's cast and a few members of the crew visited the Wagah Border, a popular location that marks the line between India and Pakistan located in the outskirts of Punjab.

The reason behind this gesture was that the film's lead pair Sonam Kapoor and Fawad Khan have been brought up on two sides of the border and they wanted to depict a new friendly relationship between the countries. In fact, the duo was seen interacting with the military and other authorities who manage the border.

Also what worked in favour was the presence of Kirron Kher. Kirron, who plays the role of Sonam Kapoor's mother in the film, is also a Lok Sabha member from Chandigarh. As the team decided to visit this iconic place, Kirron ensured that the promotions around the area happen smoothly by her being present at the venue. Kirron Kher, who also shares a great rapport with Sonam Kapoor's father Anil Kapoor, stated that this was a gesture solely for the friendship she shares with the Kapoor family. She also expressed her gratitude towards the officials and party heads who helped her in this event and also BSF who gave her the required permission.

Directed by Shashank Ghosh and produced by Rhea Kapoor in association with UTV, Khoobsurat also stars Aamir Raza Hussain, Ratna Pathak among others. The film is a remake of the 80s classic by the same name that starred Rekha, Rakesh Roshan, Dina Pathak in prominent roles. The film is slated to release today on September 19.