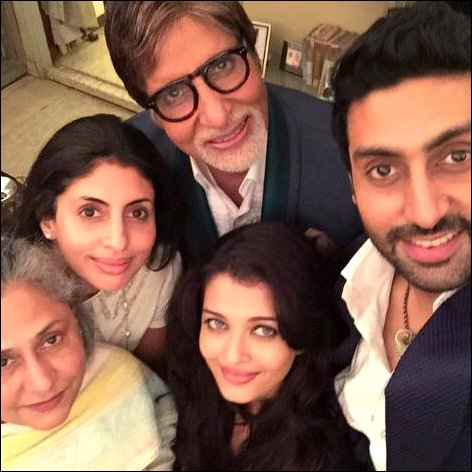 Amitabh Bachchan, the name speaks for itself. This legend has created infinite memories on celluloid and has remained the biggest superstar globally, Bollywood has ever seen. But amidst the stardom and glamour, there is a man who is equally in love with his family.


So on the occasion of his birthday, a broad smile and a family picture was the perfect gift that Amitabh Bachchan received. Amongst fan mails, portraits, collage of his films, this bond that the actor shares with his family is said to be one of the most beautiful gift that he received on his 72nd birthday. Abhishek Bachchan posted these two pictures where Amitabh Bachchan is posing with his family, on his official Instagram as he wished his father.

Amitabh Bachchan married co-star Jaya Bhaduri (now Bachchan) and is a proud father of two children. While his daughter Shweta Bachchan stayed away from Bollywood, his son Abhishek Bachchan followed his father's footsteps. He married former Miss World and superstar Aishwarya Rai and the two also have a daughter, Aaradhya. On the other hand, Shweta Bachchan (Nanda) is settled in Delhi and has two children - Navya and Agastya.