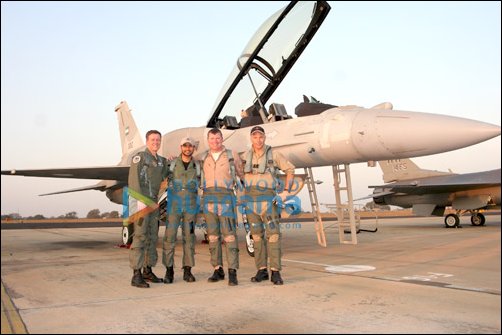 Shahid Kapoor had the experience of his lifetime when he got a chance to fly a F-16 fighter plane at the Aero India Show 2001 held in Bangalore on Saturday.

Like any other youngster, Shahid also has been dreaming of flying a plane ever since he was a child and his dream came true when he took charge of the F-16. For the uninitiated, The F-16 is a sophisticated fighter plane, used in modern warfare, and well, just to get the opportunity to fly it was big enough, but what took it a notch higher, was that Shahid actually was given a mission while flying the F-16.

A source present said "The F-16 pilots train in a very precise manner; they never just fly the plane to practise, but always fly the plane on a mission." Well, Shahid was no exception to this, and he too was given a target, he had to attack and a mission he had to achieve.

When Shahid flew in the F-16, another F-16 took off with him, and they were buddy planes, who would assist each other in the mission. It was actually the pilot of this plane, who took aerial shots of Shahid flying the F-16. The mission was an adventurous one which involved a dog fight, ground attacks and even an air to air engagement.

Shahid was thrilled to be part of such an elaborate and adrenaline pumping flying experience, which was definitely a once in a lifetime opportunity.

Speaking about this invaluable experience Shahid said, "To fly an F-16 was an awesome experience. It was thrilling, and to be part of a mission was something I never imagined I would get to do. Bear was an extremely cool teacher, he let me manoeuvre the plane, and let me learn on my own."

Shahid is the first actor in the world to fly an F-16. He went through rigorous training including a simulator test, various stress tests and blood tests before could take flight.