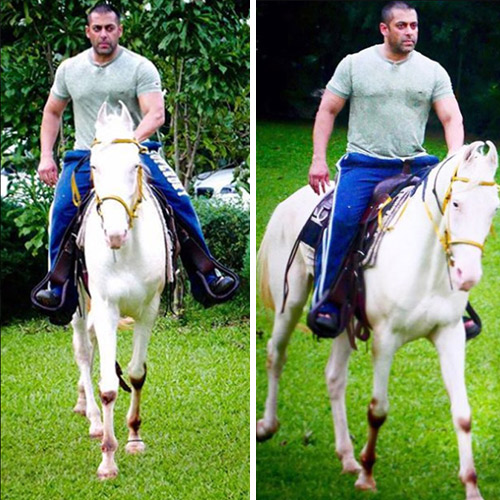 Being one of Yash Raj's ambitious projects, Salman Khan will be playing the role of a wrestler in the upcoming action drama Sultan. The actor, who has already started the physical training sessions for the film, seems to also practice horse riding.


Sharing a few pictures on her Instagram page was the superstar's sister Arpita Khan Sharma, captioning them as, "#sultan#horseriding#panvel#farm#max#handsome#brotherloving#thankyou @aaysharma for the picture !" The images have Salman Khan sporting the 'Sultan' hairstyle as he is dressed up in blue track pants and a tee. Salman Khan had earlier mentioned that he will have to make his body bulkier to play the protagonist and he will be seen doing a lot of martial arts in the film. The superstar is also undergoing training sessions for his Haryanvi diction. From what we hear, the film will have no antagonist since it focuses on the fight within (an individual). As far as the actress is concerned, the makers are still keeping the name under wraps.

Sultan will be shot in Delhi, Haryana and Mumbai in real locations and the schedule kick starts on November 22 and will continue till mid-March. It may also be noted that apart from the preps, the actor is also currently busy with hosting the controversial reality show 'Bigg Boss' because he will be shifting to a new chalet to keep a track of the show.