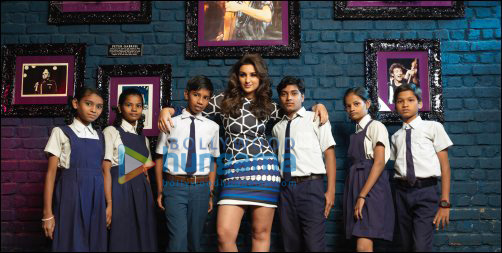 With many Bollywood celebrities dipping their hands into charitable causes and social service, the latest actress to join the league is Parineeti Chopra. While her sister and actress Priyanka Chopra is the UNICEF ambassador for development of girl child, Parineeti Chopra decided to promote education for kids.

In a bid to support it, Parineeti Chopra as a part of the mission Smile - pledge your day initiative by Akshaya Patra foundation did a 2015 calendar shoot where she will be seen posing along with kids from this foundation. She is the only Bollywood celebrity to have featured in the calendar which features top 12 achievers. Mentioning about the experience, Parineeti stated that she is humbled by this and it was great fun to shoot with these children. Also she further revealed that these kids had come for the shoot, all the way from Surat.

After recently celebrating her birthday, Parineeti Chopra is now busy with the promotions of her upcoming film Kill Dil which also stars Ranveer Singh and Ali Zafar. Produced by Yash Raj Films and directed by Shaad Ali, Kill Dil is slated to release on November 14. Post this, the actress has stated that she will on a break for about nine to ten months.