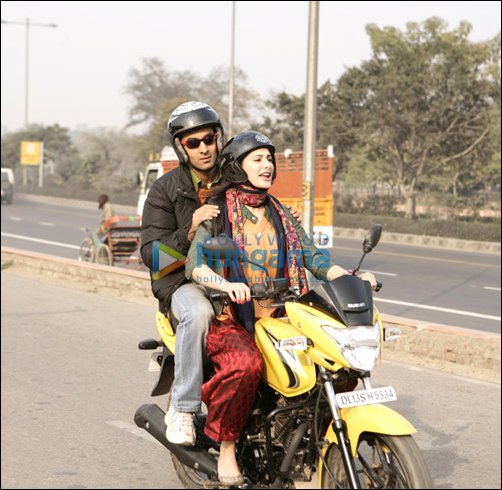 Ranbir Kapoor had the fright of his life when he had to shoot a bike sequence with Nargis Fakhri for Rockstar because he was required to ride pillion with Nargis who had just learnt riding a bike sometime before the shoot!


Apparently, director Imtiaz Ali wanted to shoot a sequence involving Nargis riding a bike with Ranbir sitting behind. Since Nargis had never ridden one, Imtiaz asked his team to teach Nargis.


To everyone's surprise, after just half an hour of practice, Nargis claimed that she could manage riding and was ready for the shot. Ranbir however, expressed his concern, wondering how Nargis could learn riding a bike in just 30 minutes! But the crew members all backed Nargis and said that she had indeed picked up really fast and was ready to shoot. That's when poor Ranbir started praying for his life.


Everyone present couldn't help but chuckle at Ranbir's obvious reluctance. However, once the shoot commenced, Ranbir realized that Nargis was indeed a fast learner and was handling the bike quite comfortably. That's when he relaxed and eventually enjoyed his short spin with Nargis.