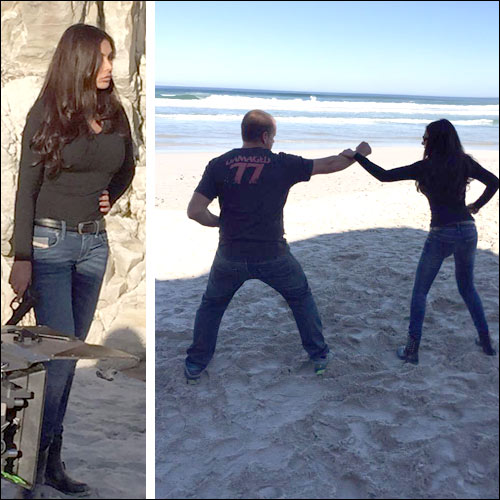 Earlier it was reported that model turned actress Lisa Ray, would soon be seen making a comeback of sorts with the film Ishq Forever. In fact it was learnt that the film which is said to be a romantic entertainer would showcase some of the popular landscapes of Hermanus, a town on the southern coast of the Western Cape province of South Africa.

Recently, the actress posted an image of her shooting for the film on her twitter account saying, "Don't try this at home kids! Working with firearms for the first time for #IshqForever.#SouthAfrica #SameerSippy." Lisa, who will be playing a secret agent in the Sanjay Dayma directorial, later, added another image of her rehearsing a few action moves, saying, "Rehearsing some action sequences on #GrottoBeach in Hermanus, of course. Why do you ask? #IshqForever."

In fact, the actress will be seen performing stunts in Ishq Forever, and has been undergoing rigorous training sessions with Grandmaster Shifuji. Posting yet another image from the sets, this time of her shooting a car chase sequence Lisa added, "All rigged up to film a chase street through the mean streets...in my lil GREEN Corvette. #IshqForever".

Co-produced by Ajay Shah, Harry Gandhi and ShabbirBoxwala, Ishq Forever, that features Krishna Chaturvedi and Ruhi Singh apart from Lisa is slated for release in November.

Lisa Ray reveals she did not have a fitting…

Lisa Ray reveals she had a cancer relapse a…

“I think the repression of woman in India is…