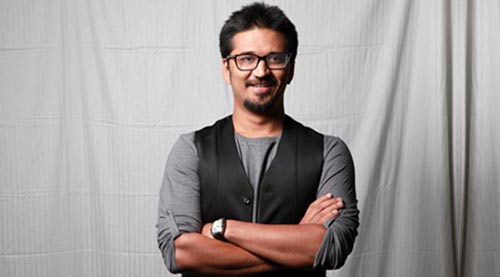 If you've heard Neeti Mohan, otherwise, a fine singer with a clear concise voice, belting out the deconstructed version of the old Geeta Dutt classic 'Jaata kahaan hai deewane' from Guru Dutt's CID, you'd wonder how a talented original composer like Amit Trivedi agreed to be a part of the musical travesty.

Amit Trivedi has never before done a remix in his entire career and now it turns out that Trivedi is innocent of the crime. Says the soft-spoken composer, "That version of O. P. Nayyar's 'Jaata kahan hain deewane' which you are hearing everywhere is not mine. The one that's out is remixed by Mike Cleary."

Amit has done a remix of the Geeta Dutt number in Bombay Velvet. But a far more faithful version! Explains the composer, "The remix I've done is a part of the narrative in the film. It's a very broken-down basic version. It suits the purposes of Anushka's characters."

Apparently, Amit is in principle opposed to remixes and he put up a strong fight against it, during the recording of the music in Bombay Velvet.

Says Trivedi, whose original songs in English Vinglish, Kai Po Che and Queen have regaled the discerning music listener, "I don't know why remixes are being done. If a director comes to me to do one, I do it as my job. Maybe, they don't believe I can deliver a tune like the old vintage songs. Such lovely songs created in the past are being remixed. Some are nice. Some are not nice."

However, Amit is happy that remixes allow young music listeners to get familiar with old classic songs. "The good thing is the younger listeners get introduced to the classics through their remixes. You won't believe this, but a lot of youngsters in the production team of Bombay Velvet thought 'Jaata kahan hain deewane' was my composition. Youngsters are not interested in old songs unless it is re-packaged."

Now, we hear that Vikas Bahl has also decided to do a remix in Shandaar which Amit Trivedi is scoring music for. "I don't know about that. But I am no part of it," laughs Amit nervously.