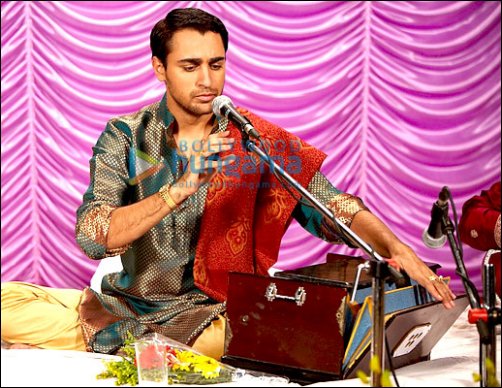 Last week, Aamir's wife Kiran Rao shot a music video for Delhi Belly in which Imran Khan in what ranks as a ferociously funny first for the actor, is dressed to the gills as a Ghazal singer, oiled hair, paan in the mouth and loads of gold rings in the finger.

The character is said to be modelled on Naseeruddin Shah's ghazal singer character in Sarfarosh and on, of all people, Pankaj Udhas.


Says a source, "The number that Kiran shot takes a potshot at the whole Ghazal culture. Imran was playing what looked like a mixture of Naseer's character in Sarfarosh and Pankaj Udhas. While we shot the number, everyone present was rolling with laughter. Imran himself would break into a giggle in the middle of an intricate alaap or murki. It was hilarious."

As for the lyrics by Akshat Sharma and Munna Dhiman, get a load of this:

Us din main Jaldi So gaya


Kiran Rao, who is holidaying with her parents in Europe, remained unavailable for comment.