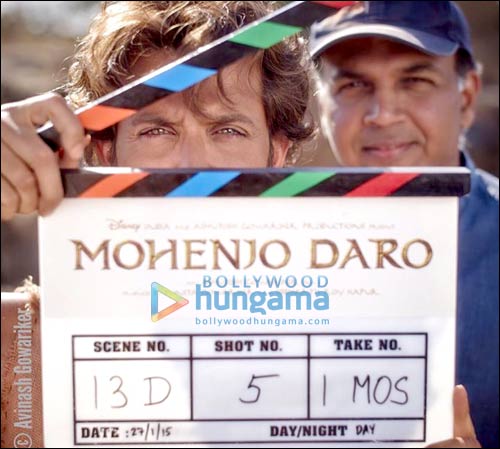 For all those who had been waiting with bated breath for the update on Ashutosh Gowariker's period love story Mohenjo Daro, this piece of news information will surely be music to your ears. The news is that Ashutosh Gowariker Productions and Disney India's Mohenjo Daro started its shoot yesterday in Bhuj with the Greek God Hrithik Roshan and the other starcast.

Speaking about the film, Ashutosh's wife Sunita Gowariker (who is also one of the film's producer), said that since the film was in the pre-production for a while now, that's why everyone (including Ashu) who were present on the sets got emotional when they took the first shot. When asked about Hrithik and his much talked about heath issues, she said that he looks stunning post his recovery. She added that, since Hrithik Roshan needed to familiarise himself with his character, they couldn't start screening any action scenes. She even added that, Hrithik's faith in them is very tremendous (as film makers) that he didn't even bother to look at the monitor after the shot. While the film's action director Glenn Boswell is expected to join the unit on February 3, the film's crew will be shooting in Bhuj till April, before moving to Mumbai.


Mohenjo Daro, which also stars the newcomer Pooja Hegde (who is paired opposite Hrithik), is expected to be wrapped up in August next year and will be headed for a release after that.