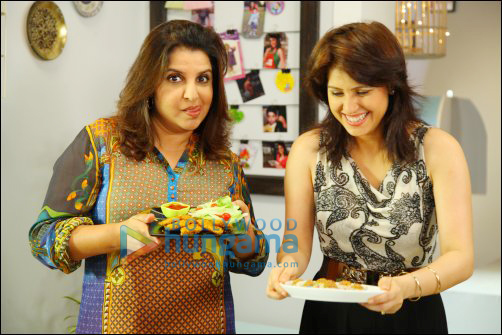 Amrita Raichand, who has over the years been the face of many a brand, now has her very own TV show. The actress and anchor recently invited choreographer - director Farah Khan on her show Mummy ka Magic on Food Food Channel. The ladies were spotted sharing their woes on the difficulties and solutions of keeping their children's diet healthy and they cooked healthy cornflake crusted chicken.

Farah Khan said that it's a task for her to make sure that the food made at her home is healthy, nutritious and should satisfy the taste buds of her three children. We heard that Farah Khan told Amrita Raichand that all the co-stars of her film Happy New Year eat together on the sets and her dabba (tiffin box) is the most awaited one because she loves cooking different varieties and carries a huge tiffin box. On this, Amrita Raichand revealed that, "Our kids are in the same class and Farah has been a humble & true loving friend since three years." She further added, "Farah's kid's tiffin is popular in their classroom too. I am super excited to have her on my show and cooking with a friend is always fun."

Happy New Year that features Shah Rukh Khan, Deepika Padukone, Abhishek Bachchan, Sonu Sood and Boman Irani is said to be an action comedy-drama film produced by Gauri Khan under the banner of Red Chillies Entertainment. The film is slated to release on October 24, 2014.