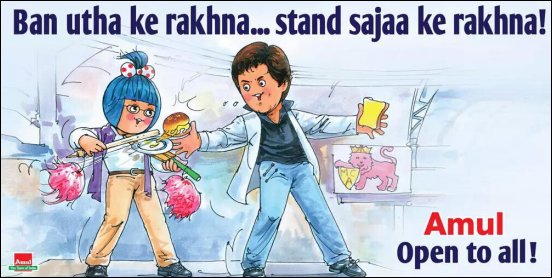 Shah Rukh Khan and his fans are thrilled as he, the co-owner of the Kolkata Knight Riders cricket team of IPL, will finally be allowed to see the matches at Wankhede stadium in Mumbai, after the ban on him was lifted recently by MCA. And now it is the popular milk brand Amul that has yet again used this piece of popular news to design a new poster.


Just a day ago, we reported that the MCA has finally decided to lift the five year ban imposed on superstar Shah Rukh Khan after he got into a brawl with the stadium security in 2012. And now, Amul took to Twitter to share its latest poster with Shah Rukh Khan and the mascot of the brand striking the actor's popular pose as it reads, "Ban utha ke rakhna.... stand sajaa ke rakhna - Amul Open to all". The lines in this poster are inspired from the song, 'Mehendi laga ke rakhna, Doli sajaa ke rakhna' from Shah Rukh Khan's popular film Dilwale Dulhania Le Jayenge.