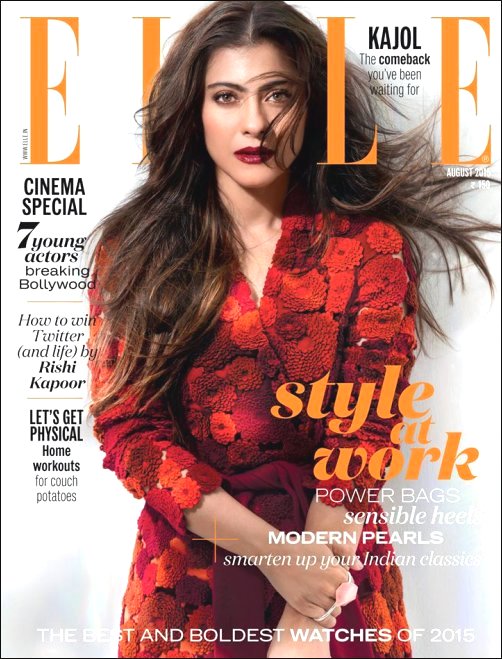 Wife of superstar Ajay Devgn and a popular actress Kajol has decided to be back with a bang this year. After many speculations about her upcoming films, the actress finally confirmed that she will be seen with Shah Rukh Khan in Rohit Shetty's Dilwale. Soon after the film went on floors, the actress has now become the cover girl for the stylish magazine Elle.


While it's been quite some time since we saw this yummy mummy sizzle on the cover page, Kajol has sported a rather simple yet elegant look for the latest edition of Elle. Sporting a bright coat dress with floral applique from Namrata Joshipura's Autumn Winter 2015 collection, Kajol opts for a minimal accessories look for the cover. Wavy hair and striking red lips finishes off her glamorous look.


On the other hand, the magazine also features a story on the new talents entering Bollywood. Also Rishi Kapoor, who has of late been involved in many controversies owing to his tweets, has decided to speak about 'how to win Twitter' in the magazine.