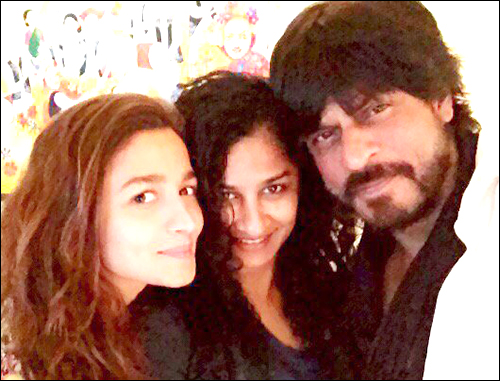 Earlier we had reported that Alia Bhatt whose next release would be Kapoor & Sons, had taken off to Goa to shoot for her next venture that that is directed by Gauri Shinde and features her alongside Shah Rukh Khan. While both Alia and Shah Rukh had a blast shooting for the film, the latter has since returned to the city to launch the trailer of his forthcoming film Fan.

Reminiscing about the shoot, Alia took to twitter sharing an image of three posting, "Will miss "hanging" u @iamsrk !!! Until next time @gauris". Ever the gentleman Shah Rukh was quick with a response saying, "@aliaa08 @gauris too much fun with u girls. Have a great rest of shoot. Till the next scheduleâ€¦"

As for the film the yet untitled venture which went on floor in Goa where it will be shot extensively is said to be an unconventional film and will take Shah Rukh to another level of self-expression.