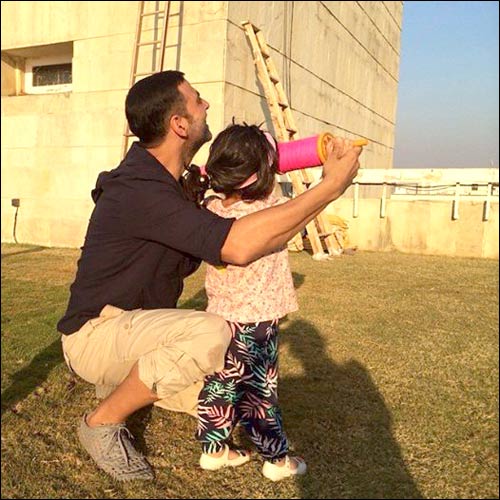 Along with a new beginning, the year brings in festivities too and the season to rejoice these special moments has already kick started with Makar Sankranti. As all the celebrities get set to celebrate it in their typical 'Bollywood' style, we spotted the doting father and superstar Akshay Kumar in a rather happy mood enjoying the festival of flying kites (Makar Sankaranti).

Wishing his fans on this joyous occasion, the actor posted a picture of him celebrating Makar Sankaranti on the social networking site. He was seen with his little daughter Nitara, as he was teaching her to fly a kite on the terrace. Missing his son who is out of town, Akshay Kumar said, "Happy #MakarSankranti! Having the sweetest time flying kites with my lil one but missing my son who's on a school trip!"

Last seen in Entertainment, Akshay Kumar is currently busy with the promotions of Baby, directed by Neeraj Pandey. Produced by Crouching Tigers in association with A Friday Filmworks, T-Series and Cape of Good Films, Baby also stars Tapsee Pannu, Rana Daggubati, Anupam Kher, Danny Denzongpa, Kay Kay Menon among others and it is slated to release on January 23, 2015.