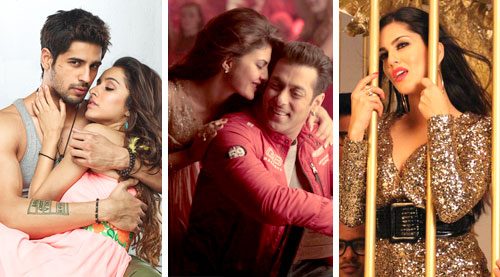 As the industry gears up for the awards season, it's time to announce the results of the Bollywood Hungama Surfers Choice Music Awards 2014. While most of you are eagerly wondering whether your favourite nominee made it to the final list, we would like to inform you that the winners have been selected based on the number of votes acquired by each of the contenders. Besides, in order to ensure zero spamming and nullify multiple votes, we made the voting system go through a fool-proof 3-step process of Email Validation, Cookie Check and IP check.

So sans much ado, here are the winners:

Best Soundtrack of the year:

Referred to as by far one of the biggest sleeper hits of 2014, the Sidharth Malhotra - Shraddha Kapoor starrer Ek Villain not just held the audiences' attention in theatres but also provided the junta with melodious, music composed by Ankit Tiwari and Mithoon. Hence it comes as no surprise that the film's album took the cake as the Best Soundtrack of the year.

Following Ek Villain was Kick that featured music by Himesh Reshammiya, Meet Bros Anjjan and Yo Yo Honey Singh and Bang Bang that had music by Vishal - Shekhar.

Ankit Tiwari who made his made his musical debut in 2011 and later shot to fame with the music of Aashiqui 2, tops the charts with his rendition of the track 'Galliyan' from Ek Villain.

'Galliyan' is followed by the track 'Muskuraane Ki' by Arijit Singh from Citylights and 'Dard Dilon Ke' by Mohammed Irrfan from The Xpose.

After winning the poll last year Shreya Ghoshal tops the charts yet again as the Best Female playback singer for the track 'Hangover' from Kick.

While Kanika Kapoor features the first runner-up with her rendition of 'Baby Doll' from Ragini MMS, Shraddha Kapoor, who made her musical debut, follows her with 'Galliyan' from Ek Villain.

Winning the award for the Best Lyrics and clocking another win for the Ek Villain team is Manoj Muntashir for his composition of 'Galliyan'. Amitabh Bhattacharya comes in second for 'Mast Magan' from 2 States while Kumaar comes in third with his composition of 'Hangover' from Kick.

Is seems like Ek Villain was the top contender in almost all categories as the film's music registers another win with the award for the Best Song going to 'Galliyan'.

'Galliyan' is followed by 'Jumme Ki Raat' from Kick and 'Manwa Laage' from Happy New Year.

With music videos becoming a rage, the title track of the Hrithik Roshan - Katrina Kaif starrer Bang Bang wins the award for the Best Music Video.

While visuals and lyrics can be stunning and tug some emotional strings respectively, it is the choreography that really adds life into any dance/ music video. This year winning the award as the Best Choreographed song was 'Jumme Ki Raat' from Kick.

Runners up in this category are 'Tu Meri' from Bang Bang and 'Bismil' from Haider.