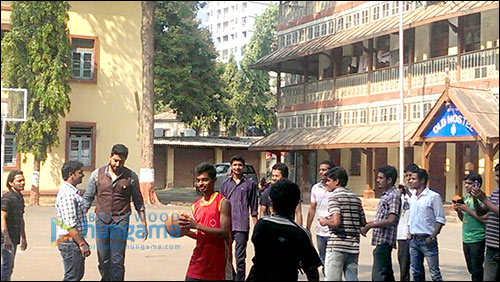 Readers may be well aware of Junior Bachchan's love for sports. Abhishek Bachchan who has often been spotted playing football matches with his Bollywood friends and colleagues, even owns a kabbadi team which recently won the league. And now the actor was spotted enjoying yet another sport.


Abhishek Bachchan, who was recently shooting for Umesh Shukla's All is Well at a suburban school, surprised a bunch of students and locals, when he joined them in their basketball game. The star who was shooting on the set at the venue, happened to take a stroll around during a break and saw a few students playing on the basketball court. Abhishek who has played basketball as a child and is an aficionado of the game joined them on the court, much to their delight. Sources reveal, that not only did Abhishek shoot some hoops with them but also shared some anecdotes about his school and college days when he played basketball more often.

Bollywood star Abhishek Bachchan recently attended the NBA All-Star 2015 and participated in the Sprint NBA All-Star Celebrity Game last month at Madison Square Garden as a goodwill ambassador to the league. The actor, a self-proclaimed Los Angeles Lakers fan, even met NBA players and legends while in New York for 5 days.