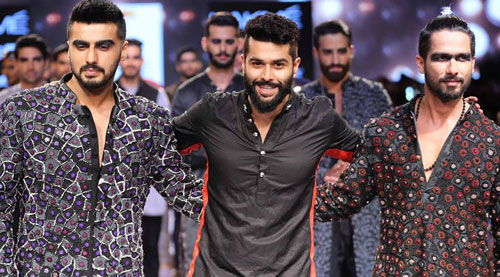 Varun Dhawan, Arjun Kapoor and many more. Due to his unique and contemporary styling, he is one of the most sought after designers for Bollywood films. In an exclusive interview

with Bollywood Hungama, the young and dynamic designer Kunal Rawal talks about his latest LFW 2015 summer resort collection, styling for films and his future

Tell us something about your LFW journey?
I made my Lakme Fashion Week debut with the first batch of Gen Next designers in 2006. I was the youngest designer to be showing at LFW. Gen Next has grown a lot since then.

Designers Masaba Gupta and Nachiket Barve are also from Gen Next. In fact, Nachiket and I still discuss the time when we had to share our first stall. When we started out we were a

bunch of nervous young kids trying to make sure our stuff is perfect and today we all have our different clienteles and markets. It is great to see how everyone has developed their

What was the first piece of clothing that you designed?
At London College of Fashion for my first college fashion show, I designed a black dress which had about 250 to 260 bows which I stitched myself because fashion labour in London was

extremely expensive. In fact I still have that outfit in my office. The back of that dress was fully smocked and taking inspiration from that piece I have come back to smocking now in my

What is it that you keep in mind before designing a piece?
Whatever I design, I make it wearable for me first because I am my target audience. I will never know what I like is right or wrong but I just go with my gut. Also men are far more

particular about how things feel and fit. In fashion a lot is about the mindset, what needs to connect to the wearer is the thought on the outside or inside. I feel you should always have

some masti in your clothes, if not possible outside then have it inside. Clothes have a certain sort of energy and you connect to that energy when you see a piece.

What was the thought behind your new Summer Resort collection that you showcased at LFW 2015?
My latest LFW collection concept is digital imagery around the concept of rework. The first thought for this collection started seven to eight months back and on a daily basis things

kept changing as there are some ideas that organically develop into bigger ideas, stories and a line but some ideas seem so ridiculously stupid that you dump them out.

What new designs have you come up with this time?

Since most of us wear more western than Indian, I have played a lot with the kurtas trying to westernize them. I have made a shorter kurta with a round neck and back

zippers as I love the clean look. I wanted to make kurtas, sherwanis, bandgalas and bandis that find a way to fit not just at weddings but also formal western events and

that is exactly what I have done with this collection. In India, the demand is currently for semiformal wear which is what I am trying to fulfill. For people like me who feel slightly stuffy

in leather jackets I have created a leather jacket with a deeper wider neck to be worn with a simple t-shirt. One of my other concepts for this year is also aeronautical, which is a move

away from my military prints.

Embroidery is something I am doing much more this season but it is in my style. There is a lot of tone on tone embroidery, French knots, tight sequencing and pleat play in my

collection. I have also done embroidery with metal pieces since metals are something I love. My leather jacket with the pleated collar has metal in it to give it that 3D type look. I have

also done pleat panels where the pleating is not done in the front but in the bordering.

What is your colour Palette for 2015?
Forest green, aubergine purple, vanilla and lemon yellow are big this season. One stand out colour is oxblood red. White and off-white combination is a staple. Black and whites are

Which fabrics have you used for this collection?
Thanks to dad being in textiles, I really enjoy developing textile. I have developed fabrics which are very Indian but have a western-ness to it. A lot of people juggle between Indian and

western functions like a sangeet and birthday bash in one night. The key is to have multitasking garments either with you or on you to help you dress up/dress down and dress

correctly for the occasion. Most of my garments can be dressed up and dressed down with styling ideas.

You have worked a lot around prints this time.
After I shot the basic collection, I started doodling and drawing on it and tweaked it making it more to my liking. I then used my print concepts for this season which included line work,

geometric and kaleidoscopic prints on the images to make my lining print. I strongly believe that insides of a garment are as important as the outside.

You are also very particular about footwear and the accessories you use.
I have designed 45 pairs of shoes for this collection and have worked very hard on the accessories because if your zippers and trims aren't great and functional then your piece no

matter how good the fabric won't have a good finesse.

Tell us something unique about your collection.
I have used a reflective fabric that I am very excited about. It is on the lines of what construction workers wear but it is a far more luxurious fabric as it is three times more reflective. The

beauty of this fabric is that if you click a picture with the camera flash on, all you will get to see is only the outfit with rest everything pitch dark due to its reflective ability.

R...Rajkumar, Phata Poster Nikla Hero, Main Tera Hero, etc. Are there any Bollywood influences in your collection?
Bollywood has come into play with colors. I have started using many brighter colours in my collection. Earlier my oxblood red would not have been this bright, it would have been four

tones darker. I have used colours like anthra, forest green, dark chocolate and warm purple, but now with brighter colours I use colours like orange, yellow, etc.

How has the experience of styling different actors in films been?
Costume design for films is a very hands-on job and something that requires your constant attention. You have to be there on the job looking at the finer details. The only way to do it is

to travel and be a part of the gypsy life from one shoot to another. All the films that I have worked on have been really exciting and have taught me something new. Actors are used to

playing different characters with different looks and costumes. There is a certain ease about the way they wear costumes even when you give them something slightly more outlandish.

I think carriage is a lot, its half your battle won once you are easy and comfortable in an outfit as that is when you make the outfit yours. All the actors I have worked with whether it is

Arjun Kapoor, Varun Dhawan, Shahid Kapoor or Ranbir Kapoor, they have a similar take on what they like and what they don't. Keeping that in mind I design clothes going with each

Which according to you are the best styled films in recent time?
Aisha till now has been one of the standout films where Pernia Qureshi, Rhea Kapoor and I did some serious prep. There was a lot of detailing that went into Abhay Deol's belt

buckles, lapel pins, tie bars, casual wear to Marc Jacob shorts which he destroys in Rishikesh while river rafting. We also collaborated with Christian Dior for some interesting

accessories. Films like Aisha are very few and difficult to come by as they have a certain setting and certain characters. Not all films have characters that are very fashion savvy

but that film was on the whole a very interesting place for anyone in fashion to be a part of.

I loved the styling of Once Upon A Time In Mumbaai. The character of Sultan Mirza was so well etched. I think Anaita Shroff Adajania is a superb stylist, she did a great job with

What next?
Right now my focus is only on LFW and my label as I have been very erratic with my showing. My last show was a year and a half back as I kept myself busy with Bollywood films.

Any plans of coming up with a line for women?
Yes, very soon. I feel every designer has a certain style and every style has takers. I have a lot of female friends who really love my stuff and I do customize pieces for them. Probably

before next season, I will be out with a collection for women.