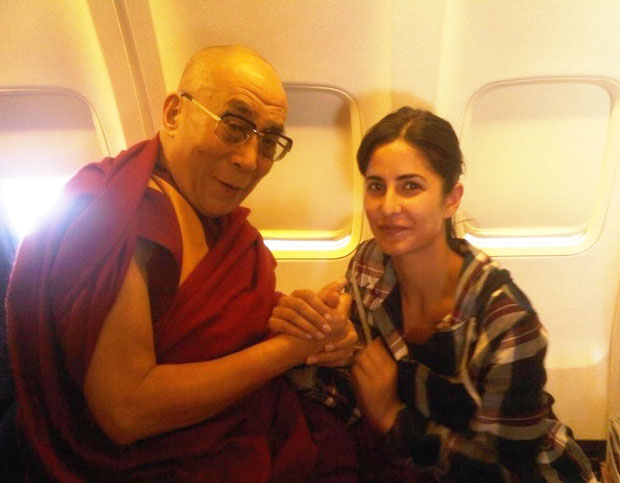 Over the years, Katrina Kaif has met several iconic people. One of greatest opportunities she has had is to meet Dalai Lama. As Dalai Lama celebrates his 82nd birthday today on July 6, Katrina Kaif shared a sweet photograph of her meeting Dalai Lama.

On this day, Katrina Kaif shared a very inspirational quote by Dalai Lama to celebrate his birthday which read as, “‘Man. Because he sacrifices his health in order to make money. Then he sacrifices money to recuperate his health. And then he is so anxious about the future that he does not enjoy the present; the result being that he does not live in the present or the future; he lives as if he is never going to die, and then dies having never really lived.’ … words that will always ring true .. only love and immense respect for His Holiness on his birthday … ”

On the work front, Katrina is currently looking forward to the release of her upcoming movie Jagga Jasoos starring alongside Ranbir Kapoor. Directed by Anurag Basu, the movie is scheduled to release on July 14, 2017. Besides this, she will soon leave for Morocco to begin the next schedule of Salman Khan starrer Tiger Zinda Hai. Helmed by Ali Abbas Zafar, the film is scheduled to release on December 22, 2017.