Ranbir Kapoor is currently in Bulgaria shooting for Ayan Mukerji's Brahmastra with his real life girlfriend Alia Bhatt. The two are spending a lot of time together filming for the movie and also chilling after pack up. While we see a lot of their pictures together, director Ayan has been very careful not to reveal his actors’ pics from set, because understandably he wants to keep it a secret. But yesterday, Ranbir's co-star Hussain Dalal shared his picture on Instagram, giving in to his fan's demands! 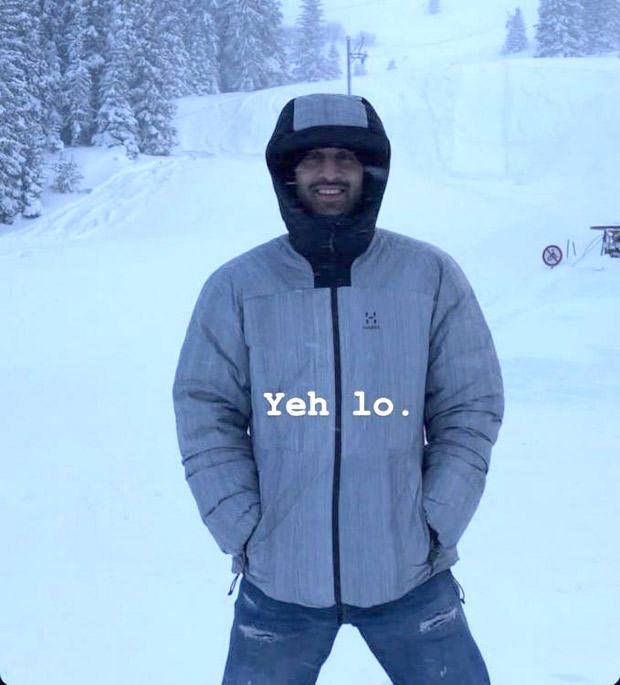 Ranbir is standing in snow-capped landscape in a hoodie and a cap and is all smiles for the camera! Weather be damned, he looks cheerful and looks like he's enjoying every bit of his schedule in Bulgaria. Alia is not to be seen here with him in this snap. But last week the two were snapped twinning in white as they obliged for pictures with a fan in Bulgaria. For those who don't know, Bramhastra is a trilogy based on a supernatural love story. It stars Amitabh Bachchan in an important role with Ranbir and Alia. Television actress Mouni Roy too is a part of the project.

Ranbir Kapoor is riding high on the success of his last release Sanju. The movie has entered the coveted Rs 300 crore club, cementing Ranbir's position as a credible mainstream hero in the industry. His next after Brahmastra is Shamshera with Sanjay Dutt and Luv Ranjan's film with Ajay Devgn. Alia, on the other hand, will be seen in Kalank with Varun Dhawan. She is simultaneously shooting for the movie with Brahmastra.