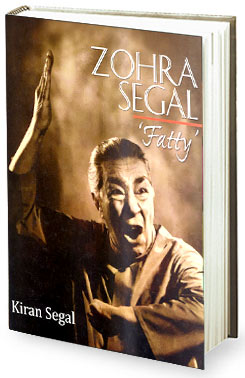 It was only after turning over 20-30 pages of the book did I realize that Zohra Segal - Fatty was actually released way back in 2012. It is surprising though that it was largely missing from the stands. Though the book was released to coincide with Zohra Segal's 100 year celebrations, I managed to have a dekko at it almost six months after she died. Nonetheless, it still was an exciting opportunity to know more about the famous actress, dancer and choreographer who was known for sharing quite a few anecdotes during her conversations, courtesy as many as 100 years behind her.

Written by her daughter Kiran Segal, who is herself a classical dancer with proficiency in Odissi, the book was expected to be an exciting read that would bring deeper insight into the life and times of the lady in question. As it turns out though, while you do gain quite some idea about Zohra Segal, right from her childhood to the growing up years to her marriage to her quirks to her interests to her hobbies and of course her personal and professional alliances, the smooth flow as well as entertainment quotient that one expects in a biography is missing. What one gets to know is a plain and dry account of one of the most colorful and lively personalities to have graced Indian cultural arena.

One doesn't quite know if that's way the lady wanted her story to be told or if Kiran felt that it deemed fit to keep things simple and straight forward. However, for a reader looking forward to some interesting enough incidents and anecdotes that would have been just befitting for someone of her stature, the end result is a hurried read through the pages of this coffee table affair.

Even otherwise, the target audience for the book is limited as well. Amongst the current generation, Zohra Segal is known primarily for her Cheeni Kum, Veer-Zaara, Hum Dil De Chuke Sanam and Dil Se act whereas the fact remains that she was quite active in the world of theater, dance academy and international TV series. Hence, for most, all of this comes pretty much as news. Now this may well have still been exciting had the narrative in 160 odd page book been more captivating and exciting. Since it is on her, what one gets to read is basically all academic, hence being further restrictive in its reach.

What does manage to keep one still interested in going through Zohra Segal - Fatty are countless pictures that are placed on practically every second page at the least. Hence, if you are indeed a hardcore fan of Zohra Segal's work, then this book may just manage to keep you interested.