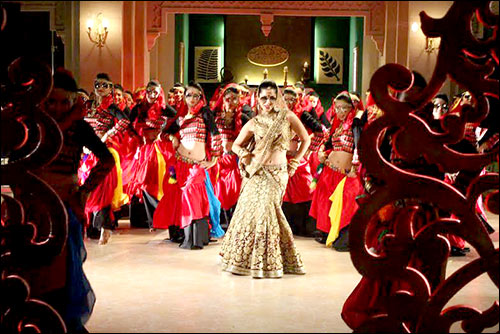 The last time we heard someone wearing a heavy duty lehenga was the gorgeous Deepika Padukone which she had worn for Goliyon Ki Raasleela Ram Leela. This time round, it's none other than the super stunner Sunny Leone, who will be seen wearing a whopping 12 kgs heavy golden lehenga! This was for the song 'Mere sayiaan super star' from her upcoming movie Ek Paheli Leela.

The said lehenga, which has been designed by Rohit Verma, has been embellished with rich embroidery. This is the first time ever when
Sunny will be seen sporting such a heavy lehenga. A source close to the film says, "Sunny's main concern was to carry herself with ease in that heavy, ethnic wardrobe. The shoot went on for 3 days and Sunny even found it difficult to sit properly. As a result, whenever she wore the lehenga for the shoot, she would not be sitting at all. But, Sunny managed to carry it and performed all her steps gracefully." The source also added that, "When the steps were becoming more complex, the choreographer- turned- producer Ahmed Khan hit upon a brainwave and decided to get another lehenga made. This time round, he requested Rohit Verma to make a replica of the same golden lehenga weighing little lighter.