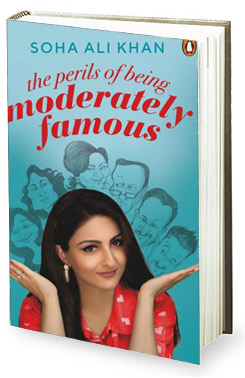 'Moderately Famous' - That actually well describes Soha Ali Khan who has been around in the Bollywood scene for just a little under a decade and a half. The young woman has been a part of some notable and some forgettable films, but has been time and again acknowledged as someone who has potential but perhaps not really got her due.

Nonetheless, as she enjoys her newly acquired motherhood phase currently, she also pens down a book that is interestingly titled 'The Perils of Being Moderately Famous'. At the very onset, Soha makes sure that she has attention of the reader as she sets the stage right. For starters, she lets her audience know that this book is primarily about her instead of her more famous brother Saif Ali Khan and sister-in-law Kareena Kapoor Khan. She does that in a humorous manner, hence setting the stage about what one could expect later in the 200 odd page book.

However, after a neat start like this, the book somehow takes some time before becoming really engaging for the reader. Reason being that quite a few pages are spent detailing the background of her parents, Mansoor Ali Khan Pataudi and Sharmila Tagore. Nothing wrong with that had the book been set as a true blue biography. However, since the book was said to be more about Soha, one had different expectations.

That said, the book does start taking a shape of its own once Soha begins to describe her life and times at University of Oxford. This is where her sense of humour is brought to the fore as well, and one realizes that her right combination of beauty and brains is accentuated further by that. Whether it is her move from Delhi to Oxford or the manner in which she found friends to the classroom sessions that she had to the way she prepared for her exams to her graduation day, Soha does well in bringing on smiles at many instances.

Of course, as expected, Soha doesn't mind talking about those one off date nights that she had or the serious affairs that she got into or the funny anecdotes from her college times. All of that is done with effortless ease and it is nice to see the manner in which she pens it all down. What is remarkable though is that all of that is pretty dignified and there is no attempt to sensationalize anything just in order to bring more eyeballs or result in enhanced sales for the book.

What one would have loved to know more though is about the relationship that she shares with her siblings [Saif and Saba] as well as her Kareena. Agreed that she had set the expectations right at the beginning of the book but still, a little more detailing (without getting intrusive) could have just made the book a more wholesome experience. However, though she does write a lot about her relationship with her illustrious parents and of course her husband Kunal Kemmu, the other aspects as stated above are left aside.

Still, you like what you read right till the end as she talks about her days and nights during pregnancy, again with a dash of humour attached to it all. This, along with the fact that she does take a reader rather seamlessly through her early days of corporate career to the world of Bollywood, is what makes 'The Perils of Being Moderately Famous' an easy and lazy weekend read.