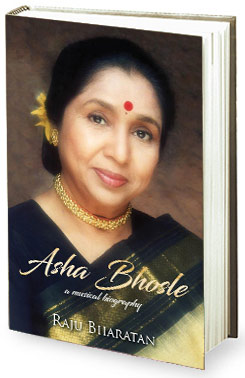 Today is Asha Bhosle's birthday. She turns 83. Author Raju Bharatan's 'Musical Biography' on her, is also out on stands since last few days and I read started reading it over the weekend. A voluminous read that it is, what with 300 odd pages of hardcore content, it took some time before I reached the final page. It was also just right that the review came out on her birthday.

That said, I picked up 'Asha Bhosle: A Musical Biography' with apprehension, in fact a lot of it actually! Raju Bharatan's last book 'A Journey Down Melody Lane' was a painful read. Released half a decade back, it made for a very tiresome read and I remember calling that out right through the review. The book went on and on and on with so much content that it was tough filtering out what was interesting and what was just add-on to the real content. Looking at the size and weight (literally as well as figuratively) that 'Asha Bhosle: A Musical Biography' carried, I wondered if it would be time to relive the (not so great) experience.

Honestly, the manner in which this book began as well led me to believe the same. Well, at least for the initial 50 odd pages. Bharatan does right in bringing to forth the key element when it comes to Asha Bhosle and Lata Mangeshkar - their professional rivalry. It made for an interesting read to begin with. However, the same element struck here again - 'where to end'! It started seeming that this particular part of Asha Bhosle's 83 year life so far (and still counting) was the whole and sole of it all. Yes, the anecdotes, episodes and tell-tale chapters were all there but one wondered if there was anything beyond that.

This is the time when apprehension made way for admiration soon. Newer chapters and stories opened up and what caught attention was the fact that this was not turning out to be let's-glorify-the-subject-of-biography-and-paint-a-colorful-picture affair. Raju Bharatan, bringing his decades of experience into account, started exposing (and not just exploring) the real happenings which could even be termed as 'ruthless' no less. If it was time to applaud Asha Bhosle for the wonderful career she has had so far, it was also time to let the world know that there have been highs and lows professionally as well as personally.

No wonder, it makes for a remarkable read when Bharatan begins to go deep into detail around the personal relationship that Asha Bhosle had with (a much married) O.P. Nayyar and how it went from an all-time high to a definite low. Was it a great professional relationship leading to a personal liaison and was there always an expiry date attached to that? Well, Bharatan goes into a detailed 'eye witness' account of what really happened.

While all of that makes for an interesting read, it is wonderful to see the manner in which the book makes a transition for Asha Bhosle when she moved from O.P. Nayyar to R.D. Burman. There have been many books written on Pancham, very recently been (not so impressive) 'R.D. Burmania - Panchamemoirs'. Still, the author makes his write-ups on R.D. Burman (and his relationship with Asha Bhosle) so impressive that you just can't put down the book. How the lady went on from her professional relationship with him to being his wife and then seeing him struggle professionally and working with her rivals is interesting.

As you get sucked into the book and get to know in detail around how Asha Bhosle progressed in her career, the manner in which she considered Mohd. Rafi and Kishore Kumar as her singing partners, the relationship that she shared with them in and out of the studio and the rivalries that she was indeed 'feared of', makes this biography a true account of the lady who has practically seen it and done all. In fact, one also has to compliment Bharatan for dedicating an entire chapter on how Anuradha Paudwal's arrival on the scene in the early 90s practically demolished the monopoly of Asha Bhosle and Lata Mangeshkar.

However, as is the characteristic of the author, he couldn't resist bringing in a lot of his 'own self' into play as well. It is amazing to see how he actually brings forth a conversation that he had with his journalist wife when she returned from her joint interview with Asha Bhosle and R.D. Burman. There are pages and pages that have been dedicated to this conversation and one wonders why this just didn't get chopped off on an editing table since this could well be a first where an author is actually revisiting a spousal conversation for a book that is meant to be a biography of someone else!

Also, one just hopes that in his next book, there is a different introduction placed for him. To have a statement that goes as - "Raju Bharatan is widely recognized as the last word on Hindustani film music in India - as the only one who was physically there 'on the scene' through the decades when music sittings and song recordings took place", and then makes a lot of hype around it during the book's introduction has been a common element in 'A Journey Down Melody Lane' as well as 'Asha Bhosle: A Musical Biography'.

Yes, this can well be seen in the content that the book has to offer. Let the readers say it out, sir! It is worthy enough to be acknowledged and readers will do so too. Your work will in any case speak for itself!

"It is hard to believe that the virus has…