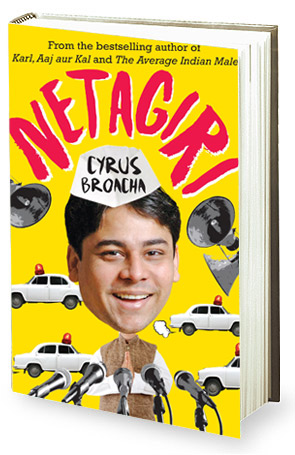 When you have a book by the name of Netagiri, you obviously expect a political satire in the offering. Especially so when the book cover has author Cyrus Broacha posing as a politician, an Indian one at that, with Khadi clothing intact. White ambassadors in the background pretty much establish the scene and convey the point loud and clear that this is an Indian political tale in the offering.

As it turns out though, the actual book is anything but that.

Instead, the story is set in a fictional land, Gyandostaan, where the protagonists are far away from Indians. A la-la-land by all means, this is a place of utter chaos and mayhem with basically clowns running the country. Of course since it is a satire, one can safely assume that all characters, incidents and anecdotes would be exaggerated. Nothing wrong with that in fact since this is what you expect from Cyrus as well.

Alas, even though exaggeration is a key ingredient here, the humor is sparse while the proceedings fail to hold your attention as well. Yes, lack of Indian connect is a disappointment that continues to run throughout this 225 odd page book but what puts off completely are the characters with whom you just don't manage to find a connect.

Ok, so I am all for spoofs and for someone who has enjoyed political tales as diverse as O Darling Yeh Hai India (that no one saw) and Welcome 2 Karachi (which a few did see recently), I have absolutely no problem with jokes as juvenile, silly and errr... well, below the belt. However, when it came to appreciating Netagiri, I just couldn't come anywhere close to it despite struggling hard to turn through the pages and actually worry about what happens next.

As for the story, it is about a youngster (Paul Huskee) who needs to rescue his Gyandostaani people from a weird and strange dictator Col. Jagee. With both the challenger and ruling leader boasting of their own coterie, the battle lines are drawn and the game of one up-manship begins. While financial scams, game of musical chairs, betrayal and treachery being the order of the day, a number of episodes are brought together in Netagiri. Also, the tone is 'attempted' as largely comical. However, as is the trouble with the book, the jokes don't even make you smile, leave aside bring on laughter, and the narrative stays dull.

A few years back, Cyrus had made a terrific debut as an author with Karl, Aaj aur Kal. He slipped with The Average Indian Male. However, sadly and unfortunately, Netagiri is a further low.

One does hope that he bounces back with something far more interesting fourth time around.