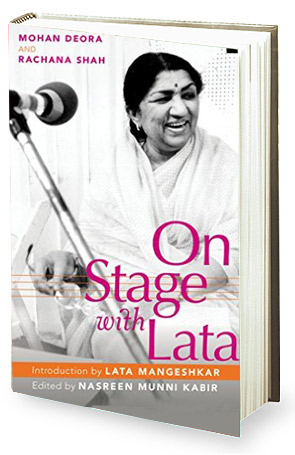 Just a few pages into On Stage With Lata and you begin to wonder who really is the target audience for the book. This one actually narrates how Lata Mangeshkar started her concert tours in the USA and then other Western countries during the mid-70s after much apprehension and then finally relented when promoter and organizer Mohan Deora promised her that it would be a visit worth remembering. The journey that started in 1975 went all the way till 1998 while Lata Mangeshkar made countless visits to USA, Canada and other neighbouring countries, while also building a good relationship with Deora and his family.

While this could well have been chronicled in perhaps a series of blogs, surprisingly an entire 150 odd page book has been released which only turns monotonous as one moves from one chapter to another. Of course Indians went crazy about the legendary singer visiting them in a foreign land, of course all shows would go houseful, of course West would realize the command that she carried, of course there would be standing ovations whenever and wherever she would perform, of course there would be demand for more shows and of course there would be many a chartbuster of hers that would made the audiences nostalgic. However to hear about this page after page, event after event and chapter after chapter makes it look like a repeat telecast, something which wears you out in quick time.

Moreover, the book turns out to be a semi autobiographical account of Deora himself (who is supported by another writer Rachana Shah and also veteran writer Nasreen Munni Kabir who steps in as an editor) as he goes on an overdrive talking about how he and Lata Mangeshkar became family over last four decades. While an anecdote or two could have been accommodating, one gets to read and hear so much about their own personal account that one ends up hunting for something interesting.

Thankfully, a nugget or two is served in the midst of this all that fetches some attention at the least. Some of the episodes featuring singers Mukesh and Kishore Kumar are entertaining while it is good to see how veteran actors Raj Kapoor, Dilip Kapoor and Waheeda Rahman introduced Lata Mangeshkar on stage in the foreign land. Also, it is interesting to know how the lady lived a 'normal life' by hitting the casinos in the USA whenever she got an opportunity. Also, the fact that she made sure artists from India were respected in the foreign land, given right attention by the audience and were also compensated competitively is commendable indeed.

However, such things are far and few and what could well have been a quick read turns out to be a full blown lengthy (and repetitive) account that makes this book a short lived affair.

"It is hard to believe that the virus has…

Lata Mangeshkar on the timeless music of…

Lata Mangeshkar - “Rishi Kapoor was my…