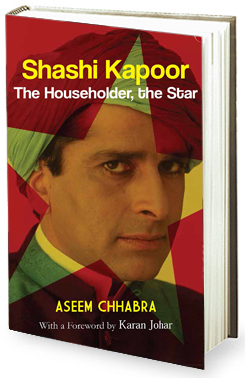 Sad. This is how you feel as you approach the conclusion of Aseem Chhabra's book Shashi Kapoor - The Householder, the Star. There is a certain image and perception that you have around the Kapoor Sr. on the basis of his overall personality as well as the happy-go-lucky persona that he has boasted of in his entertainers over the decades. However, if Chhabra's account of the life and times of Shashi Kapoor is to be believed, the man - who is currently not in the best of health - hasn't quite been enjoying the best time in his life for over two decades now.

Whether it is severe losses that he has suffered in the business of movies or the tragedy of his wife passing away or the fact that he stopped doing movies many years ago, Shashi Kapoor appears to have resigned to his fate. While this could well be true, it is tough to believe that there are hardly any chapters from his life, both reel and real, where one could sniff some sort of celebrations at the least.

Perhaps this is the mast honest (and brutal) account of Shashi Kapoor but then as the follower of Bollywood (and the man of course), you do wish some sort of sunshine in the book. Yes, there have been tragic tales told before as well, be it for Rajesh Khanna, Madhubala or Shammi Kapoor. However, there is something to cheer about in the pages that unfold. In case of this book though, somehow one reaches the last page with a heavy heart and you don't really recollect some sort of sunshine that would have corroborated with the status of Shashi Kapoor as the star.

That's a tad disheartening though as the man lived an eventful career at least from the mid and late 60s, and especially right through the 70s and early 80s where he delivered many successful films. Somehow, such high points in Shashi Kapoor's life are somehow just touched upon by Aseem Chhabra. That said, what works in this book is the kind of structure that the author adopts for the 175 odd pages that follow. So whether it is Shashi Kapoor's association with Merchant-Ivory (and his subsequent tryst with cinema in the West) or the many hits he delivered with Amitabh Bachchan, there are good exciting episodes here.

On the other hand, it is quite surprising to know that there were many Bollywood ventures that Shashi Kapoor associated himself with as a producer and except for a stray success or two; there was always a big disappointment round the corner. One wonders what really kept him going since as an actor he could have really prolonged his innings but instead, he helmed many a film as a producer (and later even as a director -Ajooba), only to end up meeting disappointment all over again.

For the book, Aseem doesn't interview the subject in question - Shashi Kapoor - and hence his point of contact stays on to be his children, close associates and journalists who had dealt extensively with the man. While that gives quite some fodder to the author to put together the book, one just feels that there is a lot more about Shashi Kapoor that remains unexplored in this book.

Moreover, other than the professional life of Shashi Kapoor that is dealt with in patches, it is surprising that not much is spoken about his relationship with brothers Raj Kapoor and Shammi Kapoor or his father Prithviraj Kapoor. Considering the fact that the Kapoor khandaan is the first family of Hindi cinema, perhaps some sort of insight on this aspect of Shashi Kapoor's personal life would have been added a lot of weight to the book.

Overall, a decent read that brings Shashi Kapoor closer to the reader, but then not enough to make them know all about the man behind the frame.