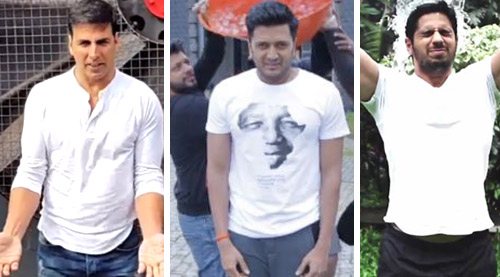 Yes, the phenomenon has finally arrived in India. I am talking the ALS Ice-Bucket Challenge that has been trending on the social networks and pulling huge bandwidth on the World Wide Web. Just like millions of others, I too have been following this campaign since past few days and I truly believe this is the most successful viral campaign of recent times, especially because it was not created and pushed by any particular digital marketing agency. Besides all the fun of pouring ice-cold water on oneself, the campaign does help in spreading awareness about the Amyotrophic Lateral Sclerosis (ALS) which is a serious neurological disease, which really needs attention.


How does it work?


The ALS Ice-Bucket challenge which apparently started from an unknown source somewhere in northern part of US works on a simple rule. The person taking up the challenge, before pouring a bucket of ice-water on himself/ herself, names three or more friends to take up the challenge in the next 24 hours, failing which, the friends have to donate money towards the ALS Association, which is doing research on finding a cure for the disease.


The fun part is that this online movement caught on after some of the famous world personalities like Mark Zuckerberg, Bill Gates, Larry Page & Sergey Brin, Tim Cook, Satya Nadella, George W. Bush and others started pouring freezing cold water on themselves and in turn challenged their other famous friends. Meanwhile, the movement was also spreading fast amongst Western celebrities like Tom Cruise, Charlie Sheen (epic video), Robert Downey Jr., Jon Bon Jovi, Jennifer Lopez, Oprah, Steven Speilberg, Britney Spears, Iggy Azalea, Selena Gomez, 50 Cent, Chris Hemsworth, Kaley Cuoco, Jack Black and many othersâ€¦ (The list is endless with new names adding up as you read this). The most important part being, the hundreds of not-so-famous people who took up the challenge and made it a massive movement in the US and other parts of the world. The fascinating part though is that not only are people having their bit of fun by drenching themselves in freezing ice-cold water, but they are also contributing (hopefully a large) sum from their bank accounts to ALS Association.


The challenge reached the Indian shores sometime last week when I saw some of my friends doing it and posting their videos on Facebook and Twitter. However, it was only a few days back when Sania Mirza challenged Riteish Deshmukh that the ice-bucket fever entered the Bollywood circle. Soon this act was followed up Abhishek Bachchan, Bipasha Basu, Sonakshi Sinha, Akshay Kumar, Sidharth Malhotra and others.


Though it was fun watching some of our celebrities drench themselves in ice-cold water, certain that things they did were way too funny.


- Like Sania Mirza is the only celebrity till now who has taken up the ice-bucket challenge twice because her fans thought there wasn't enough water splashed on her the first timeâ€¦.funny!

- Speaking of less water, Bipasha Basu for sure had the smallest ice bucket till now. Taking a cue from Sania, she should reconsider doing it againâ€¦making it sexier this time maybeâ€¦ (Trying my luckâ€¦Lol)!

- Going into complete contradiction was Daler Mehendi, who showered himself with three ice buckets instead of oneâ€¦ and that too in his living room! I am speechless!

- Akshay Kumar, on the other hand, went wilder and got himself drenched in the cold weather of South Africa with 11 buckets of sea waterâ€¦ truly action hero style.

- Sonakshi Sinha however tried to do 'Charlie Sheen' and instead of "wasting water" she put a coin in her ice-bucket and asked people to donate. Good thought Sonakshi, but Charlie Sheen had $10,000 cash in his ice-bucket that made his video a rageâ€¦ just FYI.

- And finally, the once Bollywood actress Hansika Motwani too took up the challenge too, but we really wonder who challenged her for itâ€¦

Interestingly, internationally certain celebs have managed to add a heavy glam quotient to the challenge. Yes you read it, some of the famous ladies have tweaked the rules a bit and made it an ice-bucket "bikini" challenge and boy they have managed to grab some eye balls. It started off with singer Iggy Azalea donning a neon orange bikini for her challenge, something that really got her fans drooling. This was soon followed by Katy Perry and some other American celebrities (whom we don't know and don't care much about). However, things got really hot when the super sexy star Gwyneth Paltrow donned a black bikini and took the ice-bucket challenge to an all time high. Back home however, none of Bollywood actresses have done the dare bare act yet and hotness quotient remains, well, almost zero. Poonam Pandey and Sherlyn Chopra, are you listening?


Bollywood's empty Ice-bucket without a cause?


Coming back to the serious part, the ice-bucket challenge was initiated to collect donations for the ALS Association to fund its research work. The rule of this game is to either donate money to the organization or else pour ice cold water on self. Interestingly, celebrities and commoners in the US are trying to do both, donate money to the organization as well as enjoy an icy cold shower. Something that had worked very well for ALS-A, helping it collect almost $42 million dollars now.


Looking at Bollywood though, not many Indian celebrities have spoken about the donation bit or the disease in their videos. We really wonder how many of the celebs till now have donated money for the cause or plan to do so. More importantly, when do they plan to make their fans aware about the disease? The fans sooner or later will start aping their favourite stars but it surely shouldn't be without a cause.


Meanwhile, one also wonders if it would make more sense for Bollywood celebs to take up this awesome mass-movement of sorts and help create awareness for certain local issues and support local organizations of India which really are in need of desperate help. Add that, the water-scarcity is a serious issue in India.


Bollywood celebs are many a times accused of trying to copy their western counter-parts and hence it would be insensitive to blindly follow this angrezi version of Holi and not focus on the charity part of it. Because let's face it, by now we all have seen how the fun of pouring ice-bucket on your head can grab enough public attentionâ€¦ so why not motivate people to also support a good cause.


Indians are known to be kind and giving, especially when it comes to helping the needy. And though it's totally a matter of personal choice whether Bollywood stars and their fans would wish to donate to ALS-A or not, I surely hope that our movie stars inspire their fans to support a cause and make that ice-bucket way more worthwhile, fulfilling and purifying.