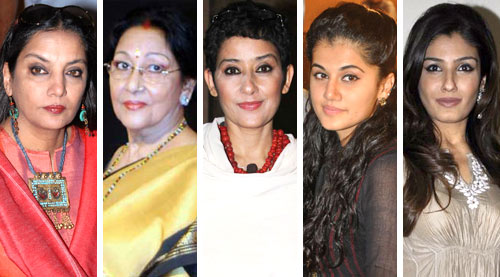 Shabana Azmi: "I have such beautiful memories of Nepal during shooting of Dev Anand's Ishq Ishq Ishq. Kathmandu, Pokhra, Thyangboche breathtaking treks... Later I visited as SAARC goodwill ambassador against HIV AIDS and for performance of my play Tumhari Amrita. So many of our staff members are from there. The scale of the calamity the devastation of heritage sites more than 2500 lives lostâ€¦such a huge tragedy. I am proud of the Indian govts swift response. But having worked in the aftermath of both Latur and Bhuj am deeply aware that fear psychosis remains years after relief and rehabilitation is provided. People will continue to sleep in the open for fear of aftershocks. Trauma Counselling is not a luxury, it's a necessity."

Mala Sinha (yesteryears' legendary Bollywood actress from Nepal): "My husband and his entire family are in Kathmandu. When I heard about the earthquake I was shattered. With great difficulty I was able to communicate with them. Luckily they are safe and sound. But my brother-in-law told me that the destruction of life and property is unprecedented. The house right in front of my sasural just collapsed into a heap. Entire villages have been reduced to rubble. Heritage sites, thousands of years' old temples, ancient monumentsâ€¦ all goneâ€¦ This was an angry rebuke from Mother Earth. The end of the world is very near. We no longer value this earth. It will be taken away from us."

Manisha Koirala: "I am too shattered to say anything about what has happened in Nepal. What can one say after devastation such as this? I want to go to Nepal immediately. But what can I do? I'm stuck in Mumbai, as the airport in Kathmandu is closed. I've made other travel arrangements and will be flying to Nepal soon. Luckily my family is safe. But my country is destroyed."

Tapsee Pannu: "I recently shot in Nepal for Baby. Such a beautiful peaceful country. It's really unkind of Nature to do this to Nepal. I hope and pray for the people of Nepal to have the strength to bounce back. But I know nothing can ever compensate them for this devastation. Sad is an understatement."

Raveena Tandon: "I've shot in Nepal. It's heartbreaking to see loss on such magnitude. We are pushing Mother Nature towards the edge; The Nepalis are a beautiful peaceful ever-smiling people. They don't deserve this. The small Himalayan country is rich in culture and heritage. It's shattering to see this happen to them."