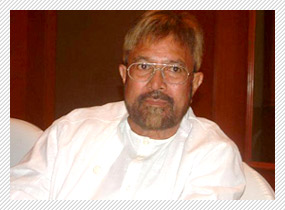 India's first superstar Rajesh Khanna passed away today in the afternoon at his residence in Mumbai. He had been battling prolonged illness since a while now. Rajesh Khanna appeared in 163 feature films and gave various hits like Kati Patang, Safar, Ittefaq, Aradhana, Anand, Amar Prem, Aan Milo Sajna and many more.

B-Town celebs expressed their grief and condolences on twitter.

Shah Rukh Khan: To live with intention & walk to the edge. Play with abandon, choose with no regret. Smile & made us do the same.Sir,u defined our era.RIP. Mom & me use to sit & watch Mr.Khanna's films back to back.Whenever life felt tough u made us feel how love could change it all. will miss u

Madhuri Dixit-Nene: Another of Hindi cinema's giants passes, Rajesh Khanna. Our sincere condolences to his family. We will miss him dearly.

Randeep Hooda: RIP KAKA .. God bless you always!! The tears you hated are going to be in abundance in your absence...

Isha Koppikar: 'The first Superstar of Bollywood passes away.You will always be alive in our hearts.R.I.P Rajesh Khannaji the eternal King of Romance.'

Jimmy Sheirgill: RIP kakaji..may the almighty bless your soul..you were and always will be a legend..

Shabana Azmi: He was d SUPERSTAR like no other Did 10 films with him Met him last at Apsara awards Pale shadow of himself but smile as winsome RIP RajeshK

Mahesh Bhatt: When we lose a loved one, something within us dies. Our generation loved Rajesh Khanna. Today a bit of us dies with this enigmatic star.

Sophie Choudhary: R.I.P Superstar,Legend Rajesh Khanna Sahib. Ur magic, ur movies & all the incredible songs u were part of shall live on in our hearts 4ever?

Karan Johar: the magic...the mannerism...the mania of RAJESH KHANNA is inscribed in every archive of indian cinema...forever....RIP SIR!!!

Sonu Sood: RIP Rajesh Khanna Sir..Was lucky to meet him few months back at an award show.The only Super Star.

Farah Khan: Just hrd the saddest news.the 1st Superstar of india is no more.bt the legend that was Rajesh khanna will live eternally thru his films.

Anjana Sukhani: Was fortunate to wrk wth Our original romantic hero..RAJESH KHANNA sir, was a legend.will always remain alive through his movies...RIP sir

Tusshar Kapoor: Rajesh Khanna ji, our 1st superstar is no more! I worked with him in kyaa dil ne kaha & learnt a lot just talking to him! May his soul RIP!

Milap Zaveri: RIP Rajesh Khanna :( every news channel is playing his death scene from "Anand" on a loop! We will miss The first superstar of Indian cinema

Madhur Bhandarkar: The epitome of superstardom is no more amongst us. There was none, there is none & there won't be any like you kakaji. You will be missed.

Sanjay Gupta: RIP Kaka. You will always be smiling and singing your beautiful songs in our hearts.

Siddharth: Superstar Rajesh Khanna has left us:( so many films, songs and memories...r.i.p sir.

Ali Zafar: Rajesh Khanna- R.I.P. So many fond memories from his movies and songs.

Aftab Shivdasani: A legacy leaves us.. Rest in peace Shri Rajesh Khanna.. Prayers for his soul.

Ayesha Takia Azmi: So beyond sad 2 hear of the passing of Rajesh khanna ji. Let us all pray for his family,so they may get strength.RIP Rajesh Khanna ji.

Anupam Kher: Rajesh Khanna gave us a crash course in Romance. He introduced us to a special twinkle in the eye that made us feel good about ourselves.RIP. Rajesh Khanna taught us how to smile. He added dignity to our concept of Romance. His songs made us forget our daily struggles of life.