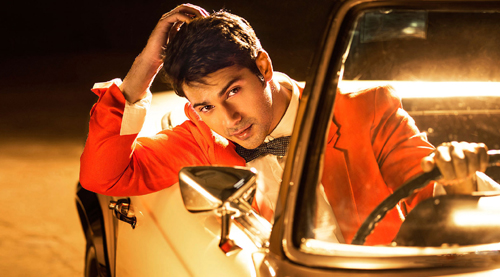 "There is bold content in Badlapur, it was necessary for the film," said Varun Dhawan in a Bollywood Hungama exclusive video interview. If sources are to be believed then this 'Twisted Entertainer' (as producer Dinesh Vijan calls it) has pushed the envelope as far as presenting boldness in physical proximity goes in Hindi cinema. Apparently there's a full blown smooch between Varun Dhawan and Divya Dutta (The third woman in Varun's life in the film apart from Yaami Gautam and Huma Qureshi).

"Since I did my first film, I've always said, that why do we shy away. If there's a kiss meant to be shown between two people who love each other or if you are supposed to show action in a certain level, then why don't we show it. Often critics criticize that it wasn't real enough, or this doesn't happen in real life, so we've gone for it in Badlapur," Varun said.

Huma Qureshi delivered a quality performance in Dedh Ishqiya. Her character had a certain mystery that added to the allure. She wants to experiment with different quirky characters. Talking about her role in Badlapur, Huma said, "Jhimli is a sex worker in the film. She is a sort of bridge between Raghu (Varun) and Laik (Nawazuddin's) character, the good and the bad world."

During the video interview, I noticed how the master actor Nawazuddin Siddiqui was being extremely shy. In fact during all my past interviews with Nawaz, I've always noticed this shy streak. I had to remind him, that he is the villain of Kick. But, as Nawaz said in past interviews with me, that an actor wants to become an actor so that he could become someone that he is not in real life. If you meet Nawaz in real life you can never fathom, that here's the same actor who was a mean killer in movies like Gangs of Wasseypur or Kick and the clever street smart office worker in The Lunch Box. It remains to be seen how he transforms himself in Srirarm Raghavan's Badlapur.