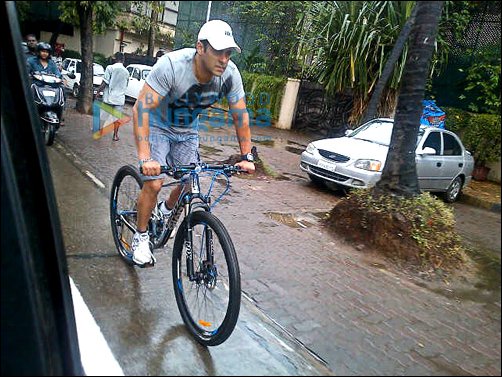 Salman Khan is sweating it out while juggling between the promotions of Bodyguard and the shooting of Ek Tha Tiger. He is among those actors in Bollywood who always looks his physical best and works very hard to keep his body fit by exercising daily. While Salman is working on promotions of Bodyguard, at the same time he is engaged in shooting for his next film Ek Tha Tiger where he stars opposite Katrina. This has left Salman with almost no time to exercise. To remain fit, this time Salman has come with a time saving alternative to his workout - regular cycling!

A source reveals, Salman does not believe in missing out on his workout sessions. But with his blocked schedule, he has no time to exercise. The only time he finds from his hectic schedule is while traveling from promotional events of Bodyguard to the sets of Ek Tha Tiger. The maverick actor sweats it out by cycling from one location to the other while utilizing the only time he has for exercise in the day.

Salman worked out aggressively to acquire a comparatively leaner look for the climax in Bodyguard and he plans to maintain it. Thus, his regular workouts cannot be missed out.


Cycling for a few hours in the day has become an essential part of his routine and Salman is indeed paying good attention to his body.


Bodyguard is Salman's and Kareena's upcoming Eid release. It will be the third Eid release of Salman after blockbusters like Wanted (2009) and Dabangg (2010).