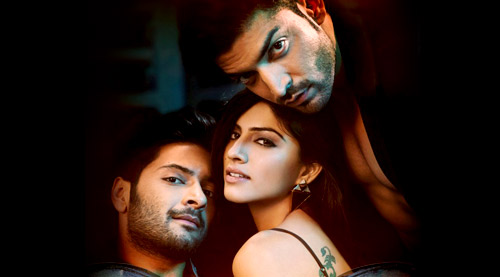 My association with Vishesh Films had started some time back. I was closely working with (Mahesh) Bhatt saab and assisted him while he was writing Hamari Adhuri Kahaani. This is when I was offered Khamoshiyan by them and I didn't say no. As long as the story is humane, the genre generally doesn't matter in commercial Bollywood cinema. In any case, the kind of films that Bhatts make always have an element of love and struggle between a man and a woman. When it comes to this, Khamoshiyan enjoys a lot of ticks against the boxes.

Bhatt saab has been really fond of me and what he really likes about me is the way I respond to the material in hand. Once he said to me that that 'Karan, you are unique in the way you explore the written word. You respond very well from your heart as your entire being just absorbs it'. He saw that in my mental ability to do so. Also, he appreciates the quality of listening that I carry. These days in the attention deficient times that we live in, where we start looking at phone at any moment or place - be it at home or restaurants where we get distracted, he liked the fact that I was calm enough to sit down and listen.

However, it isn't just him but everyone at the Bhatt camp who has stood by me. There are a lot of emotions attached to my association with them. So much so that at times it becomes overwhelming. The way they are trusting in me is phenomenal. I too have to respond with similar love and affection.

There is Vikram (Bhatt) on my side and he brings a lot on the table. He has a vast expanse of knowledge base and his craft is unmatchable. He is someone who gains from storytelling in 30 odd films. He has learnt the whole craft so well. With him around, I could have many nice and interesting discussions. He was always there as a bouncing board.

Time and again I hear about a woman being objectified in a film. This isn't really the case. I look at a woman being someone who brings in something different each time around. It is a matter of how a story demands her to be someone else each time around. Also, sensuality is a part and parcel of it all. She could be selling an after shave or a deodorant, which is basically a product for man, but she would always be there. A man needs to look at a woman. The way it is done on screen is what that needs to be correct.

This is where my heroine Sapna Pabbi steps in. When I saw her in TV serial 24, she had a very different body language. She had this whole different body language of moving around. I couldn't relate to someone else in that space. I found her to be in a very unusual zone. I found my character in her. At one time she was something and then the other she was just someone else. There was no single fixed point of reference about her, which was good as this is what worked bang on for my character. I went ahead with my gut instinct and today I can say that she is brilliant in the film.

Other than her, Ali Fazal has done outstanding in the film. I would give him a lot of credit for doing what he has done in Khamoshiyan. He is a really good actor, right from the time I have seen him in theater to the parts he has played in films. As for Gurmeet Chaudhary, I told him that his part would be in complete contrast to what he has done in the past for TV. Khamoshiyan is an interesting film for him to meddle around. It took him some time to get the right footing but then he came around really well. I just told him that from being Ram, he had to now turn Raavan.