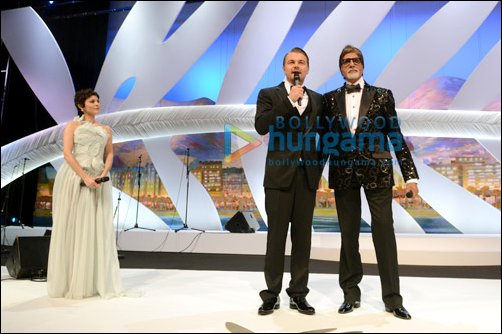 Interestingly, Bachchan spoke his opening ceremony lines in Hindi, later tweeted saying, "Acknowledging Cannes in recognising 100 yrs of Indian Cinema, it was absolutely imperative for me to address, in my Mother tongue!"

Further on his blog, the megastar added, "Truly a historic moment for me, but immensely historic and honourable for the Indian film industry, a fraternity that I am and shall always be most proud of."

This year's Cannes extravaganza celebrates 100 years of Indian cinema this year. While Bachchan was there also for the premiere of his Hollywood debut movie The Great Gatsby. The veteran actor was truly delighted at the importance given to him at the fest. Expressing his delight he posted, "The honour and respect meted out by Cannes, incredible. Announcing suddenly for Leonardo DiCaprio and myself to open the festival. With the entire world film fraternity at Cannes, applauding and welcoming our presence, treating us like royalty ... it's emotional."

"For a complete alien in the midst of Cannes to be acknowledged, is the proudest moment for me as an Indian. Acknowledging Cannes in recognising 100 years of Indian cinema, it was absolutely imperative for me to address, in my mother tongue," posted Bachchan.