Ahead of the release of Matt Reeves’ The Batman, the new images shared by Warner Bros. gives us a look at Gotham's dark underworld and the famous caped crusader's most anticipated villains. The new images show an aesthetic that breaks from previous Batman iterations, combining the camp of Tim Burton's vision and Christopher Nolan's gritty The Dark Knight series while proving to be distinct from either film adaptation of the DC comic series. 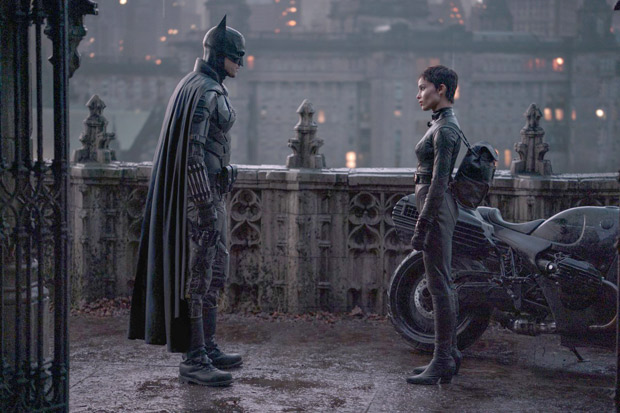 What do you think of The Riddler look in #TheBatman? pic.twitter.com/1IUQD7F1Vg

The second photo shows Colin Farrell in his role as the Penguin. Farrell is shown sitting, quite imposingly, in a leather chair, looking more like a mob boss than an avian-themed villain.

The next image is of Pattinson’s Batman talking to Zoë Kravitz’s Catwoman on a rooftop.

Another still gives better look at the upside down shot from the chase scene with the Penguin that ended the film’s second trailer at last year's DC FanDome. Seemingly from Penguin’s perspective, the shot’s orange and black color palette presents a chilling image of a shadowy silhouetted Batman beautifully.

Also, one of the images gives another look at Colin Farrell’s unrecognizable turn as The Penguin who looks to be in some sort of moody business meeting with fancy alcohol bottles surrounding him on all sides. He is sporting a checkered suit and bow tie which is very similar to something this villainous crime boss would wear in the comics.

Another new image shows Batman and Jeffrey Wright's Commissioner Gordon working together to solve this puzzling case. They appear to be in a morgue of some kind and are looking intensely at something on the table in front of them.

This brings us to the next pair of images that show Matt Reeves directing Pattinson in the batsuit with Gotham City police officers in the background. These two shots appear to be within the same sequence of the film as Reeves is wearing the same outfit in both images and, given the background, this looks to be at the crime scene where they find the Riddler victim that had their head sealed in duct tape.

Matt Reeves and Robert Pattinson on the set of #TheBatman pic.twitter.com/0ACvhtpDZR

The final image of this batch is of Pattinson’s Dark Knight in his Bruce Wayne alter ego. He is holding a duffle bag as he walks in front of a police car and is wearing a suit overcoat combo that we have seen before. Particularly in the scene in the trailer where Bruce goes to a memorial of some kind that Riddler literally crashes into.

The film also stars Andy Serkis, Peter Sarsgaard, and Jeffrey Wright. In addition to directing, Matt Reeves also co-wrote the film with Peter Craig. The Batman is set to be released in theaters on March 4, 2022.

Also Read: The Batman star Robert Pattinson rides Batcycle in the newly surfaced photo from the set in Chicago