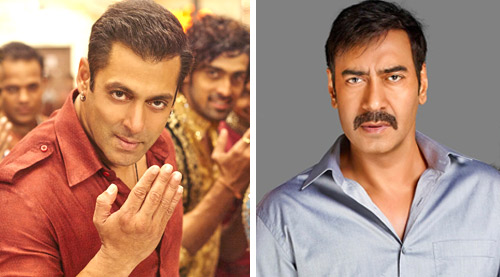 interesting phases of Bollywood. If a Bajrangi Bhaijaan is enjoying its place in the 300 crore club, a

Drishyam is steadily finding its audience as well. If a Tanu Weds Manu Returns is finding an unlikely All

Time Blockbuster status, even a dubbed Bahubali is entering the 100 crore club. Of course in the middle of this

all, ABCD 2 comes and passes the 100 crore test while films as diverse as Baby, Piku and Gabbar Is Back

deliver as well. As for offbeat affairs like Badlapur, NH10 and Dum Laga Ke Haisha, they aren't ignored

Achche din aa gaye hain, and they are only expected to get better, if the line up ahead is any indication. With an out

arriving before the close of the month, audiences have a lot to pick and choose from.

Trade expert Atul Mohan believes too that achche din aa gaye hain. He smiles, "Well, now with back to back successes of

Bahubali and Bajrangi Bhaijaan, we have got achche weeks as well. Hopefully, forthcoming lineup of

needs them all to be Blockbusters. More, the merrier."

theaters. This was followed by Gabbar Is Back, yet another Akshay starrer, which broke the jinx that was plaguing

the industry. The film's director Krish opines, "The audience is watching movies with good content and in most cases they

are coming to watch the films again and again. The film industry seems to have everything going for itself."

No wonder, Tamannaah Bhatia, leading lady of Bahubali - a film that has brought her closer to the all-India

audience - exclaims, "I am so happy that the films are getting such a great response. It is a win-win situation for all."

Amitabh Bachchan, Deepika Padukone and Irrfan Khan starrer Piku stays on to be one of the most appreciated films

of the year, and saw some massively positive word of mouth doing the trick. The film's director Shoojit Sircar says,

"Just look at the variety of ideas. All kind of films have worked commercially. Also, good time for the audience too as

they have many choices in their platter. Here is to good cinema with good content."

waiting for an adrenalin pumping affair, what with Akshay Kumar and Sidharth Malhotra fighting it out in the ring. As for

Phantom, it brings back Kabir Khan in a mould that made him in a name to reckon with post New York. For

Saif Ali Khan and Katrina Kaif, it is a new offering for the audience who would like to gain an entry into a realistic

thriller zone. On the other hand those looking for conventional light hearted entertainment may well step in for All

Is Well that brings back Umesh Shukla in the fold.

Veteran producer Ramesh Taurani, who has seen the ups and downs in the industry pretty much up, close and personal for

last 30 years, adds, "There's always achche din in the industry if your story is correct. Script is always the hero of

the film. If you remember, when the whole world was going through recession about 3-4 years back, even then our industry

didn't face any difficulty. A running success of so many films today clearly proves that content is king. Good films will

always run and bad films will not run even in achche din."

The recent example is that of Bangistan which came at a time when audiences were in mood to watch films, and still

chose to give it a royal pass.

which has given two of the biggest blockbusters ever this year, Bajrangi Bhaijaan and Tanu Weds Manu

Returns, "Today social media so strong. Things travel so fast and in just a couple of hours of a film's release, the

audience knows whether a film is to be watched. I have seen in my life where in a particular month, all four films really

do well back to back. On the other hand sometimes it may seem like a bad month when nothing succeeds. Well, when you look

Ever so positive Milap Zaveri, who is currently fighting a battle with the Censors for his own Mastizaade with

Sunny Leone, is happy for his colleagues. "Achhe films banaayenge toh achhe din zaroor aayenge! Since the month of May,

the box office has been rocking because the films have been terrific! Starting from Gabbar to Bajrangi

Bhaijaan, our cinema has rocked! Touchwood this will continue as all upcoming releases also look terrific," he says

in a hopeful tone.

Akshaye Rathi, exhibitor and distributor, adds, "These recent successes are a result of efforts where scripts have been

given good importance. I truly hope that the 'achche din' that we see courtesy them continue."

scripts, Brothers is an official remake of Hollywood flick Warrior, Phantom has its base in author S

Hussain Zaidi's novel Mumbai Avengers (which tells post 26/11 tale) while All Is Well comes from Umesh Shukla, the

Distributor Rajesh Thadani says, "Quite a few biggies are lined up in the second half of the year and are certainly

raising a lot of expectations. Of course, good times are surely back for the industry and there is reason to smile.

No wonder, the mounting has to be absolutely correct for each of these films. With Karan Johar, Sajid Nadiadwala and

Bhushan Kumar backing their respective films, there is a certain class factor that is expected to be on the cards for

Brothers, Phantom and All Is Well. The packaging does make a difference in the way a film is brought to the

audience and the story won't be any different for the ones that are set for release.

While producer Kumar Taurani too feels that the coming together of 'fresh concepts', 'branding of previous films' and

'good music' has done the trick, Harsh Jain, distributor and exhibitor, is positive about next five months to throw in

many more commercial entertainers. He says, "See, bad phases come and go, and these recent hits have given the industry

the much needed oxygen. I think now we have all big films lined up till December, so I feel the second phase of the year

Still, there is caution in the year. Distributor Ramesh Sippy quips by stating, "Can't say yet that 'achche din aa gaye

For him, and a good part of the industry, picture abhi baaki hai.

"On the face of it yes, films running well at the box office and doing good business at the cinemas does pep up our

spirits. Well, at least for the moment. But then actually we had a very dull start to the year and it is only now that it

seems we are gathering some steam. We have a lot of catching up to do and if and only if we maintain this rate and pace

of box office hits, we would end up at being very comfortable at the end of the year," concludes Girish Johar,

distributor and film business analyst on a hopeful note.

With Dilwale and Bajirao Mastani slated to close 2015 on a winning note, this could well turn out to be one

of the best years ever for Bollywood.