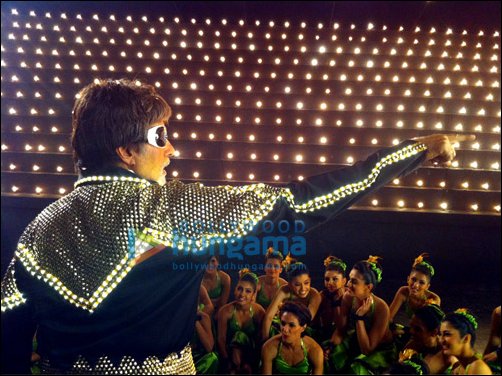 For his forthcoming film Bbuddah.. Hoga Terra Baap, Amitabh Bachchan has been going all out with promotions. As we know by know, the film has been designed on Bachchan's 70s & 80s image and style that he is famous. Another addition from the same is his famous Yaarana light bulb suit. As part of a special medley composed for him, Bachchan shot the famous 'Saara Zamana Haseeno Ka Deewana' track in the exact same way as in 1981, complete with sunglasses and the electric light bulb suit.

The song sequence directed by Shaad Ali had Shiamak Davar as the choreographer. The song features Bachchan and background dancers who wore similar costumes as in the original song, while the sets were also identical to the original.

Apparently, Bachchan who did the song almost three decades ago clearly remembered every move, thus wrapping up the shoot in record time. If that wasn't enough, the song is just one part of a medley of Bachchan's yesteryear tracks like 'Khaike Paan Banaras Wala', 'Rang Barse' and 'Pag Ghungroo', which have been specially redone for the movie.