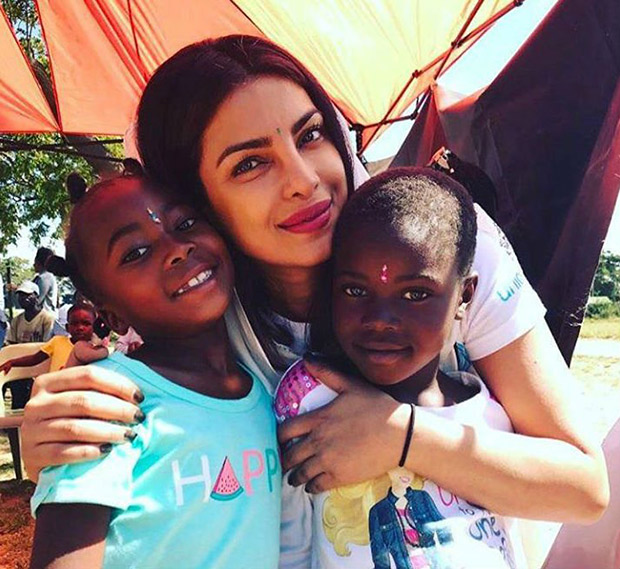 After having got Bollywood under her sway, Priyanka Chopra went onto conquer the hearts of the west with her highly acclaimed TV show Quantico. Even though the ‘desi girl’ has not yet given her nod to any Bollywood projects so far, there have been storing rumors about her being signed onto play the role of the late astronaut Kalpana Chawla, although there has been no official announcement about the same.

One has to give it to Priyanka Chopra for finding time to balance her personal life with her professional one. Recently, she had visited a children’s shelter in Zimbabwe as a part of her role of being a goodwill ambassador of UNICEF, through which she is trying to raise awareness against child abuse and violence. During her visit to the children’s shelter, not only she became unison with the innocent kids, but also ensured that the children had a gala time with her. The said children, who happen to be the ones who had been rescued from abuse just could not have asked for anything more when they were with Priyanka Chopra.

Besides interacting with the children and their caretakers, Priyanka Chopra also indulged herself in a series of fun sessions with them. She took to the social media and posted the adjoining photograph which had her with the group of children. She captioned the same as “My start to a beautiful morning before ending an amazingly insightful trip. This is an Isibindi ("courage" in Zulu) Safe Park. The parks and program are all about prevention and early intervention to protect children from the HIV/AIDS crisis and many other vulnerabilities that can lead to violence in South Africa..The volunteer child and youth care workers (CYCW) help create a safe environment for children to play and be counseled in a controlled and protected environment. The National association of child and youth care workers (NACCW) is responsible for training almost 10,000 CYCWs and deliver services to almost 1.4 million children in SA..These workers connect with the children on a personal level, in their homes and in the park, and involve themselves in their daily life events like homework, household chores, and family issues. They use ordinary human interaction to feed these children teach them life skills and take care of the emotional needs of children -especially in child headed and parent less families. I've never seen so much commitment on such a personal level. I salute them”.

She also shared a video that had her having a great time with the children. She captioned the video as “After they taught me their dance moves I showed them one of mine.. it's called the "thumka" #DanceParty #EndViolence #UNICEF #thistimeforafrica #SafePark”. And, when it came to bid farewell to the children, Priyanka Chopra gave them a group hug. She posted a video of the same as well, which she captioned as “Big group hug!! Final goodbyes.. so hard letting them go. We had so much fun. #SafePark #UNICEF #EndViolence”.

On the films’ front, Priyanka Chopra will soon be seen in the Hollywood flick Baywatch, which also stars Dwayne Johnson and Zac Efron in the lead roles. Directed by Seth Gordon, the film will be releasing on May 25 this year.

After they taught me their dance moves I showed them one of mine.. it's called the "thumka" #DanceParty #EndViolence #UNICEF #thistimeforafrica #SafePark

Big group hug!! Final goodbyes.. so hard letting them go. We had so much fun. #SafePark #UNICEF #EndViolence