Bollywood actress Athiya Shetty, who is currently in Germany with boyfriend-cricketer KL Rahul, is having a lovely time together with Akansha Ranjan Kapoor as she joined them in their recent trip. 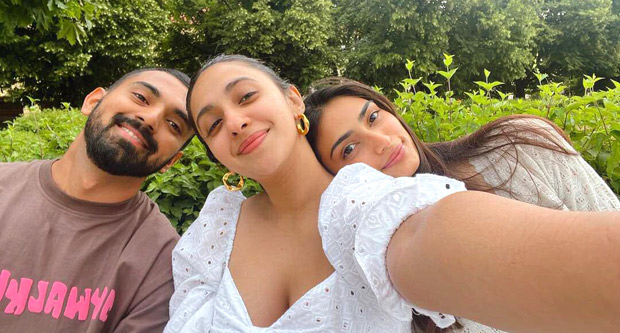 Akansha, who starred in Netflix film Guilty and web series Ray, posted a series of pictures giving a glimpse of them chilling in the capital of Bavaria on Sunday. KL Rahul and Athiya reportedly had travelled together to Germany for the cricketer’s groin surgery. Commenting on the post, Athiya wrote, "I just need my cortado. That’s all I ask for" and Akansha replied, "Please go to Spain Athiya. Ciao ciao." Athiya responded with, "CRISPppppppP."

Akansha's sister Anushka Ranjan wrote, "Nerds." In one of the photos, Akansha was seen smiling as she posed seemingly in a park, wearing a white crop top, denims and a yellow blazer jacket. In another selfie picture, she posed along with Athiya and KL Rahul smiling brightly, posing for the camera.

A few days ago, KL Rahul shared an update about his health in an Instagram post writing, “Hello everyone. It's been a tough couple of weeks but the surgery was successful. I'm healing and recovering well. My road to recovery has begun. Thank you for your messages and prayers. See you soon.” He reportedly couldn't lead the T20I series against South Africa last month because of an injury.