Ariana Grande, who is set to perform at the Grammys 2020 stage, just shared a new photo on her social media with none other than the worldwide wide phenomenon, BTS. The 26-year-old '7 Rings' singer took to her social media account on Wednesday night (January 22) to share a photo with RM, Jimin, J-Hope, V, Jin Jungkook of the South Korean group. The member Suga was missing from the photo but maybe we can expect more photos in the future. 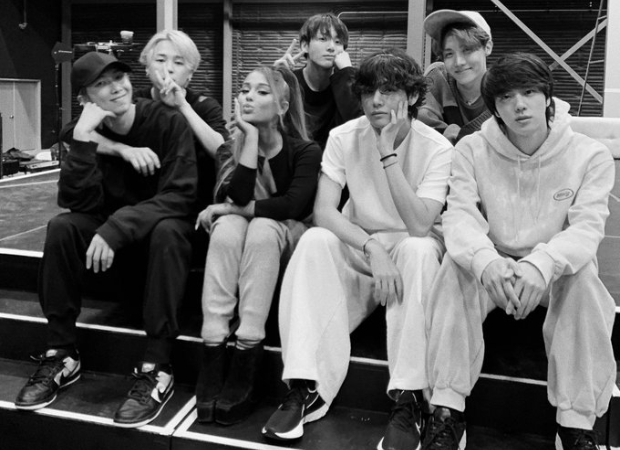 Ariana shared a black and white photo and wrote, "look who i bumped into at rehearsal :)."

look who i bumped into at rehearsal :)

Well, this ain't the first time Ariana has met one of the members of BTS. Jungkook, last year, attended Ariana's concert during Sweetener tour at the Staples Center in Los Angeles and even met her backstage. While Ariana had shared a photo with him on Instagram, Jungkook had shared the concert invite on their official Twitter account.

I felt and learned a lot after seeing her stage. I am really challenged by her stage and will try harder!#ArianaGrande pic.twitter.com/Jj0xREEK2W

A day ago, Variety revealed that Lil Nas X will have a Collab stage with BTS, Billy Ray Cyrus, Nas, Young Thug, Diplo, and Mason Ramsey. The Recording Academy is yet to confirm this.

BTS is scheduled to perform their first single 'Black Swan' at James Corden's The Late Late Show next week. Their fourth LP 'Map Of The Soul: 7' is set for February 21, 2020 release.

ALSO READ: BTS to make debut at Grammys 2020 stage along with Lil Nas X, Diplo, Billy Ray Cyrus among others