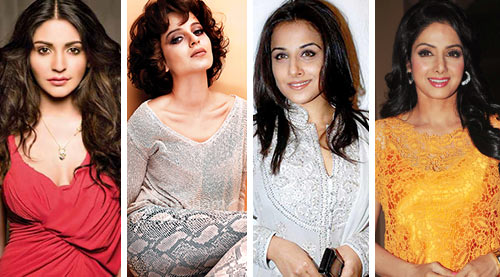 There are 100 crore hits. There are male lead driven flicks. There are multi-starrer affairs. And then there are leading ladies who have found their bearing by being a part of this combination, hence adding on to their box office profile.

However, there are heroines too who, though also benefitting from this combination, have also managed to build a niche for themselves by at least occasionally appearing in films where they are either the only central protagonist or have a very strong part to play along with their male counterparts.


After Rab Ne Bana Di Jodi, Anushka struck big time with Band Baaja Baaraat where her spunkiness quotient caught one's eye. Though she wasn't quite a driving force in films that followed, all of it has now changed with NH10 which is also produced by her. As a central protagonist in this road thriller, Anushka has come up with a fiery performance. The film is expected to commercially surpass Band Baaja Baaraat.


How fortunes change. After Rascals and feeble roles in the likes of Tezz and Knock Out, one expected her to have been knocked out from the industry. However she made a comeback, and how with Queen. Now all eyes are on how she lives up to the lead roles in her upcoming films with Madhavan, Imran Khan and Saif Ali Khan respectively. An impressive lineup for sure.


Notwithstanding a Bobby Jasoos, Shaadi Ke Side Effects or Ghanchakkar which didn't quite cover a greater distance, Vidya is still the one who finds herself as one of the top choices when it comes to requirement of a powerful performance from a leading lady. As a single mother who falls in love with a hotelier (Emraan Hashmi), she is expected to score again in Hamaari Adhuri Kahani.

Upcoming film(s) - To be decided


When Sridevi made her comeback with English Vinglish, a few were apprehensive if the leading lady would be able to bring on her characteristic magic to screen all over again. However, she delivered a terrific performance that resulted in one of the best word of mouth cinematic experiences. It has been more than a couple of years since the release of the film and one waits with bared breath to check out her next.

Upcoming film(s) - To be decided


A misadventure called Aiyyaa later, Rani Mukerji donned the uniform for Mardaani where she was the only notable name. As a cop, Rani went through a sea change physically as well. Though her last film with director Pradeep Sarkar [Laaga Chunari Mein Daag] was hardly flattering, the talented actress hit back big time with this Aditya Chopra production. One awaits what she picks on next. It has to be special.


Her biggest success till date is Krrish 3 but one film she can call her very own is Mary Kom. She came up with a thumping performance in the film and expectedly, she threw nothing but a 'solid punch' with this female centric affair. Now she has two major biggies lined up for release this year, and though one is an ensemble affair and another one a love triangle, she is expected to stand tall in both.


Though she was merely termed as a lucky mascot in early days of her career, the turnaround took place with Namastey London. Though her biggie Dhoom 3 was an out and out Aamir Khan affair while Bang Bang had Hrithik Roshan hogging the limelight, Katrina can take pride in the fact that she was on the driving seat in Mere Brother Ki Dulhan. She now has substantial performance oriented roles in her upcoming three films.


When Alia Bhatt made her debut with Student of the Year, she was appreciated but primarily relegated to the Pretty Young Thing slot. However, she surprised one and all with a mature heart-wrenching performance in Highway. While she did have conventional leading men with her in superhits 2 States and Humpty Sharma Ki Dulhaniya, the future looks bright with two back to back Shahid Kapoor starrers.

Upcoming film(s) [To be decided]


Amongst the newer talent, one girl who is living up to the promise is Parineeti Chopra. Right from Ladies v/s Ricky Bahl to Ishaqzaade to Shuddh Desi Romance, she has scored and Hasee Toh Phasee was entirely centered on her. Though her Daawat-e-Ishq and Kill Dil didn't do as well, she was a major ingredient in the scheme of affairs. She is now biding her time before picking up her next.


One film that brought a huge turnaround in her career is Khoobsurat where Sonam Kapoor enjoyed an author backed outing. The film was a big success and she was back in the bigger scheme of things. While Khoobsurat saw in a central role, one now waits to see how strong and lengthy part would she enjoy in her Salman Khan starrer Prem Ratan Dhan Payo which has blockbuster written all over it.