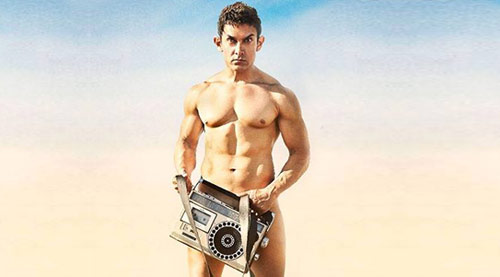 I saw you standing in gay abandon with nothing on you except something that looked like one age old transistor to hide your vitals. I should confess that I was not completely shocked when you did that. To shock people is your favourite game. Just that your kind of endeavours are intelligent and well thought over. I expected this from you. You have always been a different breed. No so long ago, when most of your counterparts like Shah Rukh Khan, Salman Khan, Hrithik Roshan, Saif Ali Khan and also Sunny Deol went smiling all the way to the bank by featuring in Chaddi-Baniyaan ads (wearing just baniyaan and too shy to show their chaddis) you were busy getting into a Salwar-Kameez, for an advertisement. "Aamir in drag" "Aamir in drag" was the news all over; everyone was talking with enthusiasm about it while you were calm and wore a satisfied look on your face. A look that meant to say, "I have lived one more character from deep within." Your desire to live many lives in one has always inspired everyone in your own fraternity to up the ante and further the limits of passion.

This time there is uproar once again. You shed it all. Not even Salman's Dixie Scot or Sunny Paaji's Cozi or arch rival Shah Rukh's ONN inner wear or Hrithik's Macroman was there to support you. You found a transistor in transit to glory that saved the world from an untimely orgasm.

In a country ridden with female exploitation, homophobia and that has the DNA of a patriarchal mindset, you make not just a sensational statement, but also stir a revolution with a pragmatic political declaration about the male body. Your dare-bare act asserts that there is nothing wrong in being in your birthday suit (as long as it is with consent). I am sure you know that accolades and brickbats come along.

That beside, I think you make one of the most poignant statements about equality. The recent legal petition against you for going full monty, is a symbol of how unbiased we are in our stupidity. Where the real problems and cases hang in limbo, we are busy filing frivolous complaints. Usually the complaints are against women, this time against a man who in his own free will decided to celebrate his body and showcase it. There is a difference between being sensual, human, vulgar and in character... The last one is you Aamir. I believe that being comfortable under one's skin is the truest symbol of freedom. To be nude publicly is a purest symbol of liberation. I had to tell you that I feel liberated after watching you being so confident in the nude.

I have been following the reactions on social media. There have been several snide comments calling you gay. I don't understand what the logic is. A nude man is nanga, not gay. Gay people are not Nanga. I am not nanga always. People just need an excuse to be offended by your intelligence. I know for sure though that, you are definitely not someone who would be offended to be called Gay. In fact, I'm sure even Kiran Rao will not be offended either. Of what I know of you Aamir Khan, I am sure you will treat it as a compliment. Much of that another section of your fans feel strongly about you.

That it is not only straight and bi men who need nayan-sukh, there is a sizable number of gay men and women who deserve a feast to their eyes.

With all the talk about homosexuality let me add that I don't feel your body is a figment of my fantasy now, you are more a reason for intellectual orgasms. I'd prefer your boyish looks to the muscle model that you have become now. But yes, some of my friends have been drooling over you. And how?

just for themâ€¦ give me that god-damn radio.

Harish Iyer a leading equal rights activist in Mumbai, had featured in the first season of Satyamev Jayate. Iyer was the only Indian to be listed in the Guardian's World Pride Power List 2013, a list of the world's top 100 influential LGBT persons