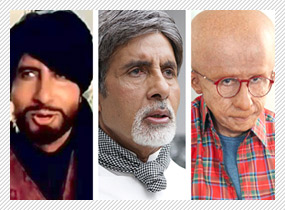 Think South India for Hindi heroes and Jeetendra and Anil Kapoor first come to mind (and Sunil Dutt till the '60s). But there is one major star whose association with the South and its people active in Hindi cinema is no less dominant: Amitabh Bachchan.

Not only has Bachchan made his debut in Telugu this year with a cameo in Manam, produced by Akkineni Nageswara Rao, Akkineni Nagarjuna and Akkineni Naga Chaitanya (the former wanted to work with him out of sheer admiration, while Nagarjuna had already played the second lead in Bachchan's 1992 home production Khuda Gawah), but he is also shooting now for the Hindi film Shamitabh with Rajnikanth's son-in-law Dhanush.

Shamitabh is also Bachchan's fourth film with R. Balki, another South Indian, even if Mumbai-based. Their films together include all Balki projects so far - Cheeni Kum, Paa (produced by Abhishek Bachchan for home banner AB Corp) and a cameo in Balki's production English Vinglish.

Incidentally, India's first film with Performance Capture technology, the 2014 Kochadaiiyaan's Hindi version had Bachchan as narrator, and the movie is a Rajinikanth home production directed by his daughter Soundarya Rajnikanth Ashwin. And Rajnikanth is not only one of Bachchan's oldest friends, but has been his co-star in the spectacularly successful Andhaa Kaanoon as well as Geraftaar, both '80s dramas. Geraftaar also starred Kamal Haasan in the lead, and his daughter Akshara Haasan now stars in Shamitabh.

And it is interesting trivia to note that the 2013 remake of Bachchan's breakthrough film Zanjeer starred South superstar Ram Charan in the role made immortal by the actor.

Amitabh Bachchan's first three connections with the South came as early as 1971-1972. Pyar Ki Kahani, a Madras (as Chennai was then known) potboiler was the first film in which songs were lip-synched by the actor, after Saat Hindustani and Anand in which no songs were filmed on him. Bombay To Goa, a Mehmood home production, was also based on a South Indian film and was directed by S. Raamnathan, later to become a Bachchan loyalist with films like Mahaan (in which Bachchan was cast in his only triple role), Geraftaar and Zamaanath, which sadly never released.

The third film was Sanjog, produced by the legendary banner of Gemini Studios by S.S. Balan, son of the titanic S.S. Vasan.

After playing a gray role in Parwana (in which he was a jilted lover who turns killer), Bachchan played his first completely villainous role in the 1973 Gehri Chaal, produced and directed by another South stalwart, Sridhar.

This film starred Hema Malini as his sister. In the same year, Namak Haram starred Rekha, though romantically cast opposite Rajesh Khanna. Both these actresses, however, soon went on to be among his most frequent romantic heroines, Hema in films including Kasauti, Desh Premee and Satte Pe Satta with Rekha (Muqaddar Ka Sikander, Do Anjaane, Khoon Pasina, Ganga Ki Saugandh, Mr Natwarlal, Suhaag, Silsila et al) also being the alleged 'other woman' in Bachchan's real life.

In the 2000s and beyond, when Bachchan moved on to be a star character artiste, Hema became his most frequent leading lady, in films like Baghban, Veer-Zaara, Baabul and AB Corp's Bbuddha Hoga Tera Baap. The last film was Bachchan's attempt to return to his old action avatar, and was the remake of a Southern film again, written and directed by South whizkid Puri Jagannadh.

A not-so-obvious South associate of Bachchan was the Tamil Nadu-born Waheeda Rehman, who had made it in Tamil and Telugu movies before Guru Dutt discovered her and cast her in C.I.D. - and she was Bachchan's sweetheart as well as mother in many movies! If Kabhi Kabhie and Delhi-6 saw them cast romantically, Adalat and Mahaan saw her playing mother as well as wife to 'two' and 'three' Bachchans respectively, and in films like Trishul, Coolie and Namak Halaal they played son and mother!

Also Yesudas, that singing titan from Kerala, who had a great innings for a while in Hindi films, was Bachchan's voice in the musical Alaap and Trishul in the late '70s.

The '80s saw Bachchan having significant associations with the South and South Indians. Showman Sandow M.M.A. Chinappa Devar's swan song, Do Aur Do Paanch, was just one Bachchan film with which the '80s took off. Leading producer A. Purnachandra Rao produced not just Andhaa Kaanoon (one of the three films in which Amitabh Bachchan was teamed with Madhavi besides Geraftaar and Agneepath) but also his arguably most memorable father-and-son dual role, Aakhree Raasta. This latter film saw Sridevi and Jaya Prada as his heroines. And both of them formed good teams with him before, and worked as his heroines in the '90s as well.

T. Rama Rao, that South director who made over 30 Hindi films in less than 20 years, not only directed Andhaa Kaanoon but also another political drama, Inquilab. While Sridevi worked in Inquilab and Khuda Gawah, Jaya Prada had a long list with Bachchan, ending with Aaj Ka Arjun, Indrajeet and Insaniyat.

Towards the end of the '90s, Mumbai-based South Indian actress Meenakshi Seshadri joined the list of Bachchan's favourite heroines - and starred with him rapidly in Gangaa Jamunaa Saraswati, Shahenshah, Toofan and Akayla.

Not many are aware that originally it was South icon Sivaji Ganesan who was to do a small role in the 1982 Desh Premee - the cameo was finally done by Premnath. And Hariharan had recorded at least three songs to go on the actor in an Amjad Khan-directed film that never took off!

And even if late, Bachchan entered the portals of the famous Padmalaya Studios, of Jeetendra fame, with Sooryavansham (1999) directed by E.V.V. Satyanarayan.Soundarya, the famous South star, was his heroine here.

Ilaiyaraja, the Shankar-Jaikishan-rolled-into-Laxmikant-Pyarelal of the South, came into Bachchan's orbit with Cheeni Kum, and became his home composer with Paa. And as luck would have it. A.R. Rahman scored music only for Lagaan, Jodhaa Akbar and Kochadaiyyaan, in which Bachchan was just the narrator, besides Delhi-6 in which he had a fleeting cameo. M.M. Kreem composed Paheli, while Sandeep Chowta scored Boom, none of which had Bachchan enacting any songs.

And destiny itself seemed to be conspiring to bring in the Southern flavour into Bachchan's life, for son Abhishek Bachchan married Aishwarya Rai Bachchan, model, beauty queen and actress, who is the daughter of a marine biologist from Karnataka. They have also been seen on screen together in Mohabbatein, Hum Kisise Kum Nahin, Khakee, Kyon...Ho Gaya Na?..., Bunty Aur Babli and Sarkar Raj.