After treating his fans with series of photographs from an ad shoot with Katrina Kaif, Jaya Bachchan, and south stars Nagarjuna, Shivraj Kumar and Prabhu, Amitabh Bachchan has shared new photograph from the sets of his shoot with “ladies at work”. 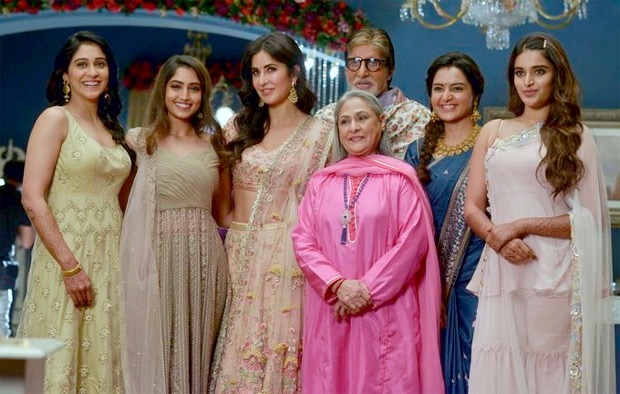 The photo shared by Big B features him striking a pose with Jaya Bachchan, Katrina Kaif, south stars Manju Warrier, Regina Cassandra, Reba Monica John and Nidhi Agerwal.  Dressed in traditional avatars, Amitabh Bachchan captioned the photo,  “and with the ladies today at work .. all of them exceptional celebrity stars in their own right .. in their own environ .. another honourable day .. sad it, the scheduled work, has come to an end .. but then tomorrow is another DAY.”

Sharing the same image on his blog, he further elaborated, “yesterday it was the men and their high celebrity status in the Film firmament .. but the ladies were there too .. all celebrated stars in their own right and their own environs .. a privilege and honour to be in their proximity and their company ..all celebrated stars in their own languages and regions .. mostly from the Southern parts of the country .. dedicated , efficient , disciplined and gentle in their countenance and demeanour .. a delight to have spent the last three days in their company .. it has come to an end today.”

He further wrote, “and quietly and without too much fuss the work has been completed , hopefully to the satisfaction of the Producers and makers .. that is what shall make this experience most attractive.”

The ad shoot is for jewellery brand Kalyan Jewellers.