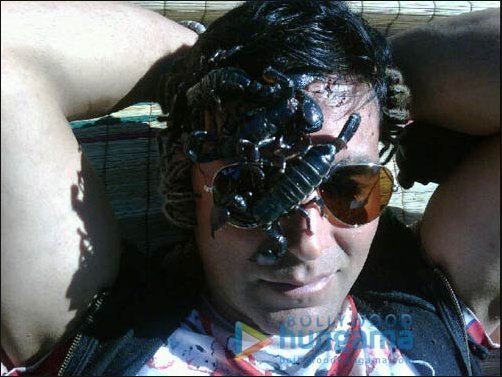 Indian's version of the popular dare sport show, Fear Factor, is underway with the fourth season being shot in the scenic locales of South Africa. Bollywood's Khiladi, Akshay Kumar, who is hosting Khatron Ke Khiladi-4 was stung by a scorpion while performing a stunt recently.

Akki was apparently stung on his index finger and arm while testing the stunt before the contestants actually went for it. Akki even tweeted saying, "Filming in Cape Town, only moments ago I was bitten by a Scorpion!" Later posing with the critters, Akki said, "Sun bathing with my new friend, the Scorpion King! Can you see the size of these things! What a pleasure, but what a sting :)".

As for the contestants, the show which claims to have the most daring stunts ever in the latest season is sure to put the contestants to the test, while Akki enjoys the most. "I know this is sadistic but I'm seriously enjoyin torturin my latest contestants on Fear Factor 4..." tweeted Akshay.