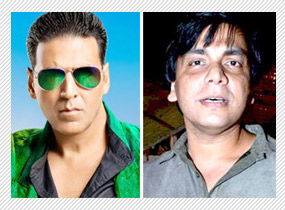 Their association began over half a decade ago when they decided to collaborate on Blue. Akshay Kumar was glad to step into the multi-crore setup that had a debutant director at the helm of affairs, Anthony D'Souza. The film shot over a period of time across continents released in 2009. Now four years down the line, the actor-director 'jodi' has returned with Boss that boasts of an altogether different grammar, stage and setting, what with rustic flavour ruling the roost and 'desi' elements taking the story telling forward.


While the film is a complete departure for Anthony D'Souza a.k.a. Tony in terms of styling and narrative, the fact remains that he was quite persistent during the last four years and wanted no one but Akshay for his next film.


On questioning how it feels when a filmmaker intends to build his entire career around him, Akshay said, "In my heart I feel honoured, but in my head I think he is crazy (smiles). Tony is a very dedicated man. When we made Blue together, he promised me that he will make with me the biggest HIT of my career. Ok, so it may not have happened back then, but I am telling you now, the man won't rest until his words are my reality."


Continuing to shower praises on his director, Akshay adds, "He is probably the most honest hard working man in this industry. He doesn't sleep, he doesn't stop, he doesn't go home to his son until he is done with what he came to do. This happened on every day of his schedule. He is our best Technical Director. He may not have the biggest name for himself right now, but he will. Moreover, if he wants to work with me, I have to say that's a pleasure."


While one can see the kind of trust, confidence and faith that Akshay has in Tony, one can also see some good momentum being reached as far as buzz and hype for the film is concerned, especially with songs topping the charts and talkie promos being received well too. Moreover, the recent Guinness record created by the film for the largest poster ever has given the film further mileage and impetus.


"When instead of you it is the people who do all the talking for your film, there is no better feeling," says Akshay fondly, "I know it has come from them and not from my distributors throwing money at an event just in order to catch people's attention."


He reflects, "As a matter of fact, I wasn't even in the country when both my trailers and the songs were released worldwide. Hence, unfortunately I couldn't speak out for them. Thankfully my fans did. In fact there are going to be quite a few surprises ahead from my fans and their passion to support me. Wait and see."


We are for sure.