Akash Ambani and Shloka Mehta got MARRIED in a total grand style over the weekend in a wedding fit for a royalty. Bollywood’s who’s who attended this event of the year along with top personalities from the sports, politics and business. While most of the celebs indulged in the wedding festivities, Twitter went into an absolute tizzy as they caught the frenzy of the wedding on the internet. There was of course memes galore on social media which caught our attention. While everyone from Shah Rukh Khan to Aamir Khan featured on this list, there was one rather unlikely contender: Jackie Shroff. Jackie stayed true to his roots and paired a multi coloured pure Bandhani scarf over a well fitted kurta-salwar. 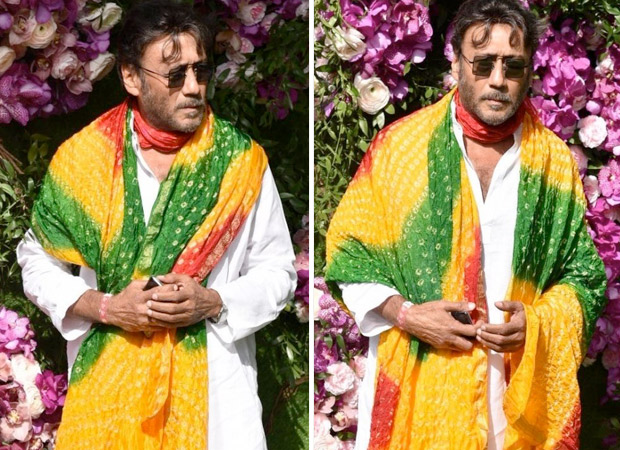 This let the internet lose it completely. Some called him ‘panditji’ others asked him if he mistook the event to be his son Tiger Shroff’s wedding!
Furthermore, there were comparisons made with his dupatta and the shirt he wore in Rangeela! Check out all the fun memes and tell us what you think?

BREAKING NEWS:#AmbaniWedding has made the record of having the most expensive Pandit.

Overall, masses were pleased because atleast they got some MEME MATERIAL to last for a very long time, thanks to this shaadi

The #AmbaniWedding made sure India won't run out of meme material for at least a month. This is my favourite part so far..#AkashShlokaWedding #AmbaniWedding #SRK #RanbirKapoor #Bollywood pic.twitter.com/5neet00hi5

Also Read: Shilpa Shetty and Jackie Shroff pose for a picture and it is sheer nostalgia for us!