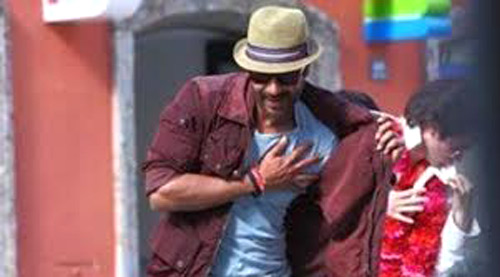 Though Ajay Devgn is seen looking like his director and dancer-extraordinaire Prabhu Dheva in Action Jackson, Prabhu reveals that the actor's dance steps in Action Jackson are actually inspired by Rajinikanth.

"I don't know why people think Ajay Devgn is copying me in that dance move. It's just a coincidence that the step is similar to what I do," says Prabhu.

Prabhu says Ajay's dance steps are inspired by Rajinikanth. "They both derive a great enjoyment from their dance moves. It's wrongly assumed that Ajay Devgn is not a good dancer. That's far from true. He has a great sense of rhythm. And he has matched steps with Sonakshi Sinha in Action Jackson like a pro."

Prabhu is readying the film for release on December 5. "This is the perfect time for release. Ajay's Singham Returns has been loved. For the next two months he has time to promote the film without being whisked away to do something else."